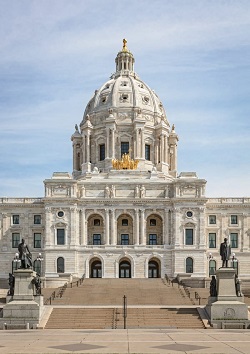 The 201 members of the House and Senate return on January 31, 2022, to gavel in for the start of the regular session. The Minnesota Legislature remains divided with a DFL-led House of Representatives and a GOP-led Senate.

The DFL-led House announced all legislative work will continue to be conducted virtually, while the Republican-led Senate will operate under a hybrid model.

Statutorily, lawmakers have no required business to complete in the second year of the legislative biennium. Historically, even numbered years are considered the time for significant infrastructure investment packages also referred to as bonding projects. However, the last 18 months in Minnesota and nationally have been anything but typical.

The legislature is constitutionally required to adjourn by May 23, 2022.

Additional driving factors in the session will be the significant influx of federal funds coming to the state, the upcoming election with all 201 lawmakers and the governor on the ballot, and re-drawing of all 201 legislative districts.

Redistricting
Redistricting is supposed to be in the purview of the state legislature, but due to political divisions between the DFL-led House and GOP-led Senate, it is not likely the chambers will come to an agreement. Previously, the courts have determined the 201 newly drawn district lines in 2010, 2000 and 1990.

The drawing of districts is done every decade according to updated census data. Minnesota was anticipated to lose one congressional seat due to population changes but held onto the full eight seats.

The courts are expected to provide its version of district lines near February 15, 2022.

Senate (34 GOP - 31 DFL - 2 Independents)
In the Senate, both sides of the aisle welcomed new leadership in the 2022 session. Four-term Senator Jeremey Miller (R-Winona) was elected as the Majority Leader following the announcement by Senator Paul Gazelka (R-Nisswa) of a gubernatorial bid.

On the DFL side, three term Senator Melisa Lopez Franzen (DFL-Edina) was elected Minority Leader. Franzen replaces Senator Susan Kent (DFL-Woodbury) who announced she would step down as Minority Leader and not seek reelection.

The GOP maintains a slim majority but continues to benefit from the two independent members, Senator Bakk (I-Cook) and Senator Tomassoni (I-Chisholm). The “Iron Rangers,” who in general caucus and vote with the GOP, received committee gavels in the 2021 legislative session. Bakk chairs the Capital Investment Bonding Committee while Tomassoni chairs the Higher Education Committee.

House of Representatives (69 DFL-60 GOP-4 New House Republicans-1 Independent)
The House of Representatives did not see a leadership change in either caucus this year. The DFL-controlled House will continue under the leadership of Speaker Melissa Hortman (DFL-Brooklyn Center) and Majority Leader Ryan Winkler (DFL-Golden Valley) and the GOP caucus leaders, Minority Leader Kurt Daudt (R-Crown) and Deputy Minority Leader Anne Neu-Brindley (R-North Branch), are likely to remain in their roles.