A Paved River Bottoms Trail in a Flood Plain? 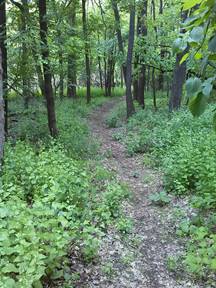 Against all common sense and FEMA guidance  the MN DNR is asking for funding from the City of Bloomington and the Metropolitan Council, and preparing preliminary plans to pave 12 miles of trail, 14 feet wide, along the Minnesota River Bottoms, in a flood plain. That would require destruction of the last portion of a natural habitat that is mostly untouched. And although full funding hasn’t been secured, nor have historical, archaeology and environmental impact studies been completed, the DNR plans to start construction (i.e., habitat destruction) in 2018, per statements made by the DNR in a March 27, 2017 City Council study meeting. Bloomington did not offer funding.

A local group “Save the River Bottoms” www.savetheriverbottoms.org is working to stop that habitat destruction, while supporting modest improvements along the current trail.

Currently a historical, natural surface, trail spans the 12 miles of Bloomington’s southern border / the river’s northern border. The path pre-dates the 1969 legislation (Minn. Stat. Section 85.015, Subd. 6 ) that designated it part of “The Minnesota Valley Trail.”  It had been used by hunters, outdoorsmen, birders, and children of the local communities.   There are now areas that have boardwalk, gravel, or woodchips but much of the path is dirt. Per Bloomington resident and trail-user Ellen Rohe, “It is maintained by a yearly sweep from the DNR to remove the big stuff but the majority of the work to keep the trail open is done by volunteers from the users of the path, with no cost to the taxpayer.” 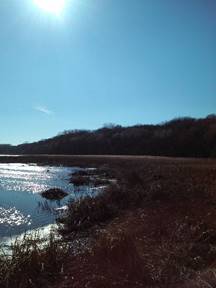 Ms. Rohe further described the eastern section alongside the current trail:  “The portion in between Cedar Avenue Bridge to 35W is bluffs.  What isn’t a bluff is a marsh.  What isn’t a marsh is a swamp.”  And she also commented about the proposed paved trail:  “The DNR would be responsible for maintaining the trail.  On a flood plain.  Where it floods.  All the time.  It was flooded last fall.  Right in the spot that they are trying to put in a 14-foot-wide paved path.”

Just across the river, on Burnsville’s northern border / the river’s southern border, the paved Minnesota Greenway  , as reported by the Star Tribune, is part of a planned 75-mile DNR trail, Minnesota Valley State Trail (note similar naming to 1969 legislation), that will connect Le Sueur to St. Paul.

So why is the DNR proposing a duplicate paved trail along the Bloomington section of the river? It seems that they are trying to comply with 2015 legislation.  Thank former Bloomington HD50B DFL Representative Ann Leczewski.  In 2015, Representative Tom Hackbarth (R, HD31B) introduced bill HF1168, a bill that had been duly introduced and heard by two committees and placed on the General Register of the House, that would have required that the trail be kept as a single, unpaved natural surface trail.  At the very end of the special session of 2015, without Rep. Hackbarth’s knowledge, by action of Rep. Lenczewski, the wording was changed to: “Must be a paved trail developed primarily for hiking and bicycling.”

During his final legislative year, Representative Hackbarth later took the stance, in a May 2016 House Capitol Budget meeting that if Bloomington wants the trail paved, it’s up to Bloomington (to fund it). 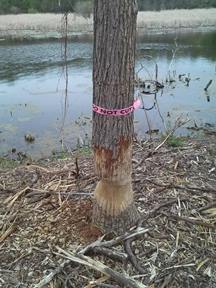 To sign a petition and for more information, see the organization’s website . We encourage all readers to contact your MN legislator to register your opposition to the paved trail project. Bloomington residents should also contact their City Council representatives.  A legislative mistake in 2015 should not be the cause of natural habitat destruction and unsustainably high ongoing costs for maintaining a paved trail in a flood plain.

Photo at right (Beavers Can't Read) - a tree marked as "Do Not Cut" by DNR, near Cedar Ave. Bridge.