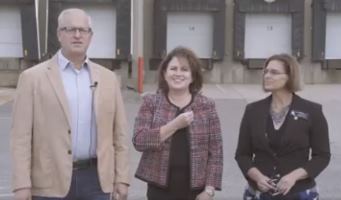 On September 30, the Minnesota House Republican Caucus released a video that Governor Walz apparently does not want our mainstream media to see.
Using his self-declared emergency powers, Gov Walz authorized the purchase of a large warehouse in May. Without consulting with the state legislature, the governor determined that the $7 million purchase was required to handle a significantly large number of dead Minnesotans, based on projections of a hastily-constructed public health model.

After the purchase, the state-owned “morgue” has been off-limits to the public until Representative Jim Nash (R, Carver County), Representative Marion O'Neill (R, Maple Lake), and Senator Michelle Benson (R, Ham Lake) were finally allowed to tour it. What they found were pallets and pallets of such things as disposable isolation gowns.

The takeaway: it was an unnecessary use of taxpayer funds, was never and will never be used for its intended purpose, and is a shining example of why the legislature needs to be involved in these decisions — governing by the whims of one man is not working.