On the evening of August 24, Rebecca Brannon, an independent photojournalist who contributes video and photo stories for Alpha News, was harassed and assaulted while covering a Black Lives Matter protest in downtown Minneapolis. 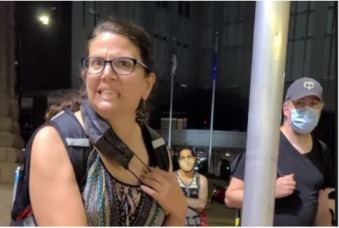 Working alone, she was recognized by several protesters. In a disturbing video posted by Alpha News, the protesters proceeded to shout profanities at her and followed her as she walked to her car. When Brannon pointed out that she also had a right to stand on the public sidewalk, one middle-age white woman (pictured at left) hit her, including at least twice with a construction cone that the woman picked up off the street.

Brannon continued to video record the actions of the protesters who were harassing her, until they stole her phone and tossed it into a fountain. The phone was destroyed, but the video recording was recovered from the phone’s memory card.

As Brannon said the next day, “No journalist should be subjected to harassment or violence by police, protesters or anyone.”

One would think that the Star Tribune would concur strongly that such treatment of Brannon in their backyard was intolerable; they’ve not reported or commented on the incident.