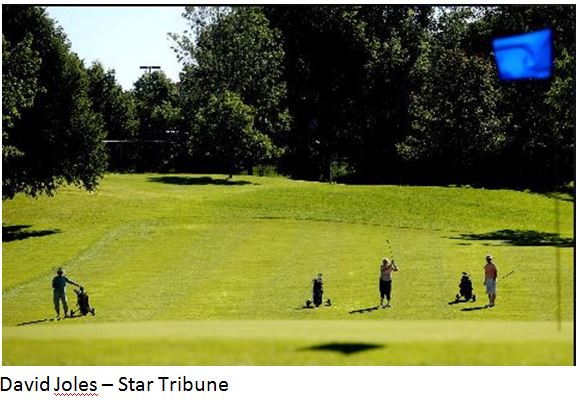 On November 30, the Star Tribune reported that the Bloomington City Council is “expected to reject all housing development proposals” that were submitted for the development of 10 acres of the Hyland Greens golf course.  In June, the city had released a request for these proposals as part of a plan to sell this public land for private development.

The Sun Current article cited a news release as the source of information that the Bloomington City Council is “expected to revisit the issue again early next year and possibly request proposals for the golf course property ‘with new parameters.’”

Few details have been shared with Bloomington residents.  Nothing has been said about what the new guidelines might be or what the reasons were for rejecting the proposals.  The formal vote of the City Council on the proposals is on the agenda for their meeting on December 4.  It has been placed on the “consent” agenda, meaning that public discussion will likely not be permitted on this agenda topic.

Early on, a city-chartered study group gave a number of recommendations to address declining use of the Hyland Greens golf course.  As a last resort, the group considered the development of the 10 acre parcel in a way compatible with the nearby neighborhoods. After the City Council voted to approve the release of the RFP for development, approximately 1,600 citizens signed a petition to save this public land.  Clearly, there is substantial interest in what is being discussed and what is being planned regarding this parcel.

The city has gone to some lengths to keep a tight hold on the details.  Before the November 30 report, the Bloomington City Council announced that they would review the proposals in a closed study session.  Then, on or about Saturday, November 25, the City posted that the meeting would no longer be a study meeting but rather a special meeting.  Nonetheless, the City Council voted to close the portion of the special meeting that would deal with the proposals.

The reason given for the closure was that state statute allows for closed meetings if the discussion was expected to involve negotiation-sensitive material.  Despite the release of an open call for proposals with specific criteria, the city is expected to reject the proposals with little information as to cause.

In 2018, after the November election and the seating of three new city counselors, the City Council will address if the land will remain public land or if the city will press ahead with the plan to sell it for development.  If a new Request for Proposals is issued, despite the clear concern of 1,600 citizens about the sale, it will be interesting to see what the new “guidelines” will be.