The free exercise of religion is a fundamental American right.  Yet, of equal importance is that all people should enjoy equal protection under the law.   Residents of the east Bloomington neighborhood around Smith Park have been raising concerns about the Dar al Farooq Youth & Family Center for several years.  On June 27 and July 25, a large number of those neighbors were present when those concerns were detailed to the Bloomington City Council.

Attorney Larry Frost made clear that the concerns were not a reaction to the presence of an Islamic house of worship or an aversion to diversity in the neighborhood.  The concerns are with the failures of the city government to enforce agreements that they have made with the Dar al Farooq Center and city ordinances dealing with traffic, parking, and public parks.  Frost built a case suggesting that the city government, by its actions and inactions, appeared to be favoring Dar al Farooq Center over other recently-approved churches and to the detriment of the surrounding neighborhood. 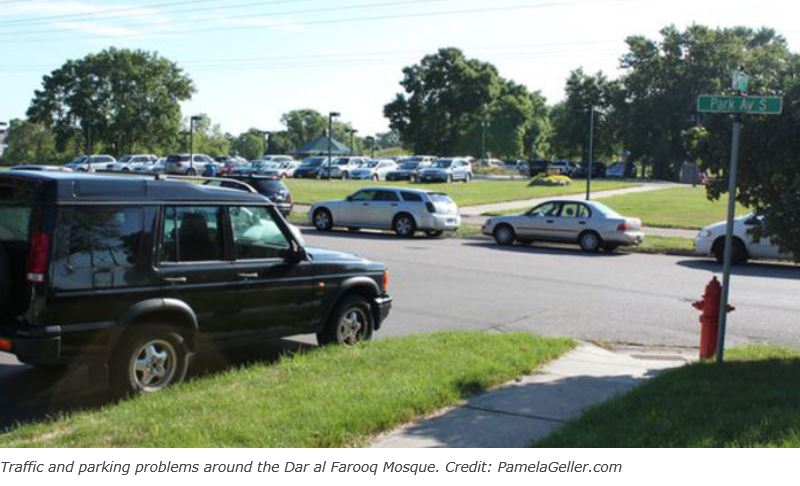 The Dar al Farooq Youth & Family Center moved into a former Lutheran school building located at 8201 Park Ave about five years ago.  It abuts Smith Park, which has led to issues with shared use of parking spaces for park access and use of an athletic field.

Leo Hohmann, of WND.com, reported on July 27   on the list of abuses and alleged violations by Dar al Farooq.  They include:

The mosque members take over the adjacent public park and force out residents of nearby neighborhoods, often staying in the park well after the posted closing time of 11 p.m.

Neighbors have been told by mosque workers to get out of Smith Park “because the park belongs to [the Muslims],” said one local woman.

In addition, City employees have told neighbors if they park in joint-use parking, the neighbors have to “hurry to the sidewalk” and get out of the parking lot so it would be available for the mosque.

Matilda Zumba, who lives near Smith Park, and spoke told the City Council on July 25,

“The park is very important to the Spanish community especially and we met there a lot, but now we don’t because we don’t feel safe.”

Mosque members were recently witnessed using joint-parking areas to practice driving at 1:30 a.m.   Later, a police officer told the witness that “only mosque members can use the parking lots after normal park hours”.

Representing the neighborhood group, “Friends of Smith Park,” Larry Frost recounted to the City Council on July 25 that it granted a conditional-use permit (CUP) to Dar al Farooq enabling the mosque to operate in a residential neighborhood, then failed to enforce either the CUP or the joint-use agreement allowing the mosque to use Smith Park.

Significantly, as reported in the Bloomington Sun Current (“Neighborhood formalizes Islamic center concerns”, Mike Hanks, July 29, 2016), Attorney Frost also expressed concerns about the minutes and recorded files associated with discussion centered upon the Youth & Family Center, saying that portions of past discussion have either been left out of meeting minutes or have been edited out of audio and video files.

He pointed out that City employees have accused those that are speaking out of being ‘anti-Islamic’ when what is being asked is the enforcement of the law.  This makes many of the citizens afraid to speak up, and that is wrong.

The city council did not respond to Frost’s request that the council keep its oath of office and have the courage to actually enforce the Bloomington City’s Codes and the existing restrictions contained in the voluntarily agreements signed by the Center.

The neighborhood group intends to submit a petition that essentially asks the Mayor, City Manager, and City Council to enforce the voluntary agreements reached between the City and the Center and documented in the Center’s CUP.  Frost has requested copies of a variety of documents and files associated with earlier City Council discussions about the Dar Al Farooq Youth & Family Center.  He intends to amend the citizens’ petition with additional information when his data request has been fulfilled by the city and submit it to the city for its formal response.