"What the planning staff in Bloomington is proposing is modest and incremental movement along visible lines of change to accommodate trends visible today, without fundamental alteration of Bloomington’s quiet residential nature."

Somebody is planning your future, whether you know it or not. Every decade or so, every city government in the Metro Area is required by law to submit a general plan for the future of their community to the Metropolitan Council for its approval. The Metropolitan Council, receiving all these mandated community plans, has the job of putting them all together and making sure that they are all consistent and fit together into a coherent regional plan. 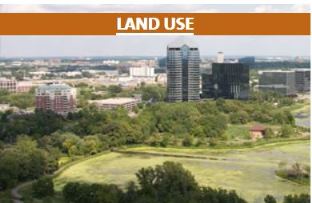 Each city’s plan is a broadly-based comprehensive look at the strengths and weaknesses, the trends of population and development and the wide range of possible outcomes that all of that data might suggest. It’s all a sort of “Here’s where we came from, here’s where we are, and here’s where we’d like to go!” exercise that every responsible management team needs to go through periodically, to stay prepared for the inevitable surprises that all too often explode “the best laid plans” with disturbing regularity.

As it’s normal role in this process, the Bloomington planning staff has recently held a series of presentations of its “Forward 2040 Comprehensive Plan”  to elicit public reaction. As it turns out, the planning document turns out to be far more interesting as a statement of city government’s general mindset than perhaps they might have intended.

The report is divided up into the normally expected subject areas of analysis, like “Land Use”, "Housing”, “Transportation”, “Utilities” and such, and goes into great detail about the trends and projections for each category, given the changes observed over the last 50 or so years.

Bloomington, as most of us already know, came to life in the years following World War II and grew from a rural farming community with a population of less than 10,000 in 1950, to over 50,000 in 1960 and more that 87,000 in 2016. We began, and still remain, a primarily residential community with commercial activity spread throughout the city in relatively well defined centers, primarily adjacent to I494 and I35W. In fact, almost 72% of Bloomington is either residential or “Public/Quasi Public” land like preserves, golf courses, churches, parks, schools or government facilities, and only 28% for all other uses.

What has changed over the years, and especially over the last 20 years, has been the demographics of our neighbors in Bloomington. To be sure, we are older now than we were before, but we are also more diverse than ever before, as well. We are blessed with a wider array of cultures, ethnicities and racial heritage, than ever before and what all that means is that Bloomington is evolving and will very likely continue to do so into whatever future all that might beget.

And right there is where the Bloomington “Forward 2040 Comprehensive Plan” becomes most remarkable. If this plan were originating in Edina or with almost any other city government planning staff, the planned changes and visions for the future would almost certainly be vastly more grandiose and “Visionary” than those proposed in this document. There would be massive 20 story high-rise clusters, light rail mass transit and skyways galore, with bike paths up and down every street and magnificent monuments to hyperactive government. But not in Bloomington!

What the planning staff in Bloomington is proposing is modest and incremental movement along visible lines of change to accommodate trends visible today, without fundamental alteration of Bloomington’s quiet residential nature. Improvements in bus service, with not even a mention of light rail, thank you very much. High density low rise residential in focused redevelopment areas. Incremental expansion of facilities such as park access and recreational trails with some market driven efforts toward solar energy and other environmental efficiencies, and a host of other quite benign measures.

Why, it almost leads the jaded and skeptical reader to believe that the City of Bloomington actually likes Bloomington the way it is. Who knew???