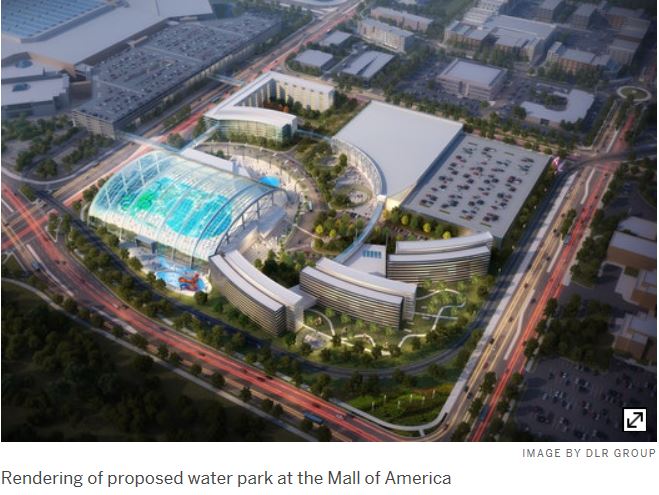 The Mall of America (MOA) wants to add a waterpark to its many attractions.

Not just any waterpark. At 225,000 square feet, it would be one of the largest indoor waterparks in North America.

KARE 11 News reported that on March 6 the MOA briefed the Bloomington City Council and the Port Authority on its proposal for a $150 million to $200 million waterpark across 24th Avenue from the mega mall on land that the MOA owns.
The MOA plan proposed that the waterpark be publicly owned and taxpayer financed. Representatives from Triple 5, the corporate owners of the Mall of America, told the Bloomington City Council that due to the changing climate of retail, and its struggles to keep up with Amazon, they are pushing new projects to have half of its makeup focused on entertainment.

The Mall of America is about 70 percent retail so adding another entertainment venue would help increase more traffic to the area, they claim. The indoor waterpark at the West Edmonton Mall in Canada attracts more than 500,000 guests annually.

At this point, the proposal to develop the MOA land across from MOA is just beginning to be considered. The Star Tribune  noted that that the city is nowhere close to approving the water park. Port Authority Administrator Schane Rudlang said that the project “is in the extremely early stages,” while [Mayor Gene] Winstead called the March 6 meeting a “very preliminary conversation.”

Nextdoor, the web-based community forum, has seen an extensive exchange of opinion on this proposal. Although it is not yet clear what position the Bloomington City Council will take, skeptics and supporters have already started lining up.

Supporters believe that Bloomington would benefit from the taxpayer-funded waterpark because
• Bloomington does not have a community center and needs a place for year-round “family fun”
• It would attract people to live in Bloomington because we don’t have enough community attractions when compared to Eden Prairie or Blaine or Eagan.
• The waterpark would entice customers from outside of Bloomington, benefiting Bloomington hotels and restaurants and bringing revenue into Bloomington beyond that flowing to the waterpark

Skeptics argue from the standpoint that, when taxpayer funding is involved, there should be some concern for return on investment.
• Does Bloomington need to build and operate another waterpark?
• Are waterparks really money-makers?
• If they are, why shouldn’t the owners of MOA build and finance the waterpark on their own? Particularly at today’s low interest rates.
• At an estimated profit of $1 million to $2 million a year, the $200 million investment would likely never get repaid. It would be Bloomington's equivalent of the Minneapolis downtown US Bank Stadium.

No doubt, the dialogue will continue.