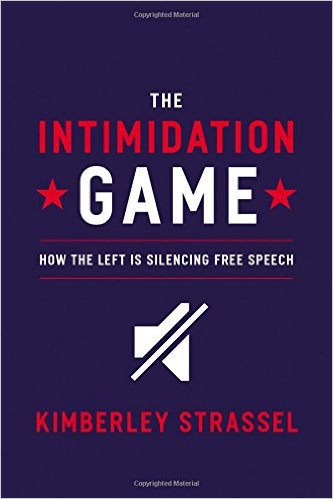 We now know that this election cycle’s harassment, confrontation, sign-burning and even violent attacks on Republican supporters were coordinated and funded by Democrat activists.  These and other acts of intimidation have been escalating since the mid-1990’s. But they reached new highs (or lows) as the IRS under the Obama Administration focused on Tea Party organizations applying for nonprofit status.  And intimidation continued as prosecutors in Wisconsin used unconstitutional “John Doe” investigations in 2013 – 2015 to suppress conservatives in that state.

The Intimidation Game is a well-written, page-turner of a book.  It is the stories of individuals who’ve been “called up, served up, beat up, and run out” for taking part in political causes.  Kimberley Strassel explains in understandable language some of the legal twists and turns.  Strassel reveals how we got from the 1950’s Supreme Court decision that protected the rights of Americans to engage in politics with some degree of anonymity to today’s pressures for full and immediate disclosure, without regard for the risks of retaliation.

To see a video of author Kimberley Strassel speaking in June 2016 at a forum hosted by the Heritage Foundation,