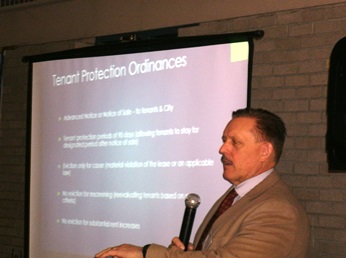 Local governments are under increasing pressure to use their power of permitting to require developers to include less expensive housing in their building plans. In his talk on February 26 as part of Senate District 49’s dinner program series, Brad Aho noted that land, labor, and construction material costs are going up faster than the wages of many of the people who currently live in or would like to move to our area. Still, local and regional governing bodies are also a significant cause of increased housing costs in the Twin Cities area.

As an Eden Prairie City Council member for 14 years, Brad Aho has been in a unique place to watch his city develop. He presented comparison information about local communities' housing costs and incomes, showing there is a need for "affordable" housing in our suburbs. He also has a good sense of why housing costs have gone up. He noted that it costs more to build a house in the Twin Cities area than in a suburb of Chicago. A report commissioned by a builders group, recently cited in an article in the Star Tribune, found that an average home in Lake Elmo would cost $47,000 less in Hudson, Wisconsin.

Aho pointed to overlapping local and regional governments as a big part of the affordability problem that they are now trying to solve. Building regulations and fees are significant cost drivers. As much as 33% of the cost of building a new home here can be traced back to local, regional (e.g., watershed districts), and state policies and fees. Aho said that “municipal fees and regulations in the Twin Cities make it nearly impossible to build a single-family house for less than $375,000.”

Aho acknowledged that some fees cover the cost of construction inspectors who ensure local codes are enforced. However, the value to lower income homebuyers of fees such as “park dedication fees” are less clear.

Rather than reduce regulations and fees, many local governments are turning to developers and telling them it is their problem to figure out. This is proving to have limited success. The Metropolitan Council sets an affordable housing goal for communities in its regional studies. In a timely article published shortly after our dinner program, Bloomington City Manager Jamie Verbrugge noted that a Met Council representative told him that “just about every community fails to meet that goal.” (Bloomington/Richfield Sun Current, Thursday, March 7, 2019)

Bloomington might actually be a partial exception. The Sun Current article above indicated that Bloomington is planning to require developers or renovators of 20 or more units of multifamily or single-family housing to offer at least 9% of them at affordable rates. In return, the developers or renovators may select from incentives such as reduced requirements for parking spaces, storage space, unit sizes and building materials, as well as fee waivers and financing options. In essence, if someone wants a more affordable unit in Bloomington, they might have to accept a small living space with on-street parking, for example.

Bloomington will be evaluating the success of this approach, determining which of the tools and incentives work and which need adjustment. The city is prepared to make adjustments as it gains experience.