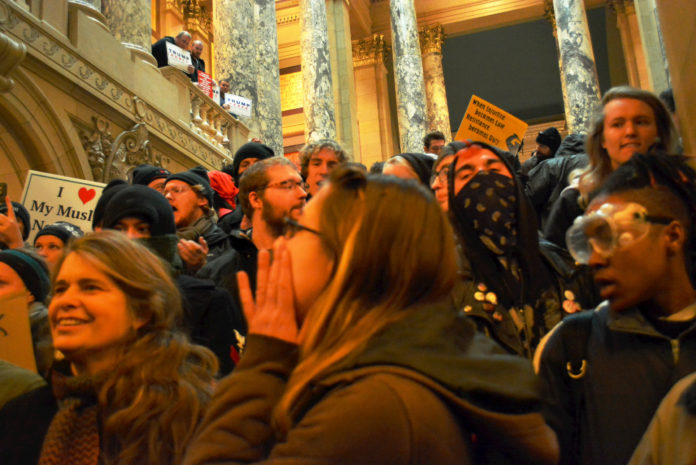 In early March, a number of supporters of President Trump held a legal rally inside the State Capital.  They were met with a counter-demonstration that became disruptive and potentially dangerous.  Police arrested several of the more violent protesters.  Finally, almost three months later, the Ramsey County Attorney and the St. Paul City Attorney filed charges against eight of the anti-Trump protesters.

Will these individuals, who cannot tolerate a different view, legally be held accountable in a court of law? Will all Americans living in the Twin City area be allowed to voice their opinion on any and all matters without suffering violence?  Where do the leaders of Minneapolis and St Paul stand on those that would disrupt and potentially endanger those of us willing to rally in support of our President?

The legal proceedings against the protesters are slowly moving forward. There are upcoming future court dates that will decide the fate of all eight protesters. We all hope for justice.

Read on for more details about the rally and the charges against the protesters.

And CLICK HERE to read Alpha News reporting about the much swifter filing of charges for June 10 violence.

On March 4th 2017 approximately 400 pro-Trump supporters gathered at a permitted rally at the State Capitol to celebrate the election of President Donald Trump. At the same time approximately 100 anti-Trump protesters gathered in the Capitol hallways outside the Rotunda. While most of the anti-Trump protesters were non-violent, as they moved into the Capitol some started to become disruptive. They  chanted loudly, blew whistles, and used air horns in an attempt to drown out the celebrations. Many started to verbally confront Trump supporters. As inappropriate as some of the anti-Trump protesters were when they arrived, it only got worse. Police claim they saw seven or more protesters hide behind bushes to put on black clothing and masks or face coverings. They joined the other protesters as they moved into the Capitol.

Almost 3 months later, on Friday the 26th  May, in a joint press conference, Ramsey County Attorney John Choi and St. Paul City Attorney Sam Clark announced they had filed charges against eight of the anti-Trump protesters. Choi indicated that some of the protesters “broke away” from the main group and tried to enter the rally from the second floor staircase “by pushing and shoving.” Choi also said “During the disturbance, they employed smoke bombs, mace and fireworks, thereby creating a chaotic and dangerous situation.”

It has been reported that Trump supporters were sprayed with chemical irritants, got hit in the head with a smoke bomb, and punched in the face. Jonathan Aanestad, an organizer of the rally, described the anti-Trump protesters as committing acts of “political terrorism.”

Choi proclaimed “When people seek to prevent others who are peacefully assembled from making their voices heard, it threatens the very foundation of our democracy”.