On Wednesday, September 7, at 7pm, the Edina City Council will essentially decide between good stewardship of our tax dollars and fiscal irresponsibility. Please mark your calendars for the public hearing on this issue at Edina City Hall, 4801 W. 50th St.   If you can attend to simply show support for fiscal responsibility, you are reminding the Council that it’s our money, not theirs. If you wish to speak at the public hearing, please do so. Writing emails and letters to the Edina City Council is making a difference, so if you cannot attend the hearing, that’s a powerful way to help. 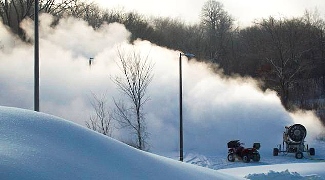 Recently, we wrote about a proposal put forth to the Edina City Council to construct a winter “recreation facility” within Braemar Golf Course. LINK to article

It includes plowing a 50-foot wide Nordic ski path that would run about 3 km (2 miles) around the perimeter of Braemar, along with an 11-lane “tubing hill.” The proposal would raise taxes, and cost visitors money to do what can be done today in the existing space, but for free.

Although the Council made its first public mention of the proposal on May 17, most residents were not aware of it until the Edina Parks and Recreation Board sent a letter on July 6 to some 3,600 households in the southwest quadrant of the city, notifying them of an “information meeting” on July 13. It wasn’t until then that many of us learned the disturbing details. All Edina taxpayers, however, did not receive that letter.

For perspective, the ski trail would be 50-feet wide—about the same width as the westbound or eastbound sides of Highway 494. This is no quaint hiking trail; it’s equivalent to a four-lane highway.

After the July 13th meeting, the City Council admits that it has been flooded with emails, calls and letters from residents opposing this project for a variety of reasons: environmental damage, noise and light pollution, public safety and fiscal irresponsibility, to name a few. Supporters, too, have been campaigning in favor of this proposal but since May, since a select group of supporters knew of the proposal early on. This gave them essentially an unchallenged, private audience with the Council for up to 60 days before the July 6 letter went out to some residents.

Supporters generally have children on the Edina High School Nordic Ski Team. They claim the students have nowhere to practice and the ski trails are necessary; this is not entirely true. Their current practice space was reduced somewhat after a foot path was constructed through the space the team normally used. Some simply think “it’s a great idea. Fun!” Some don’t live near Braemar, but like the idea of a “premier ski facility,” despite Hyland’s ski trails (which run about 9 km long, not 2-3 km) a mere six minutes away from Braemar by car.

Supporters tend to be aligned with either the Minnesota Youth Ski League or various retail sports facilities in the area, along with a strong push by the vendor (SEH) which has already been paid approximately $150,000 of taxpayer money to perform the feasibility study. The proposal has been fast-tracked, on the basis that the golf course is already under construction.

To date, the petition opposing this irresponsible use of tax dollars has gained nearly 700 signatures of actual Edina residents; whether the signers of the supporters’ petition are mostly Edina residents is not clear.

Make no mistake: This debate is not about a mean-spirited attempt to deprive 200 students of practice space. It’s not about being lazy or non-athletic. It’s certainly not about a “not in my backyard, or NIMBY” attitude, since a great many opponents live in Edina but nowhere near Braemar. Supporters, however, have framed it as such. One supporter posted on their petition that those of us who oppose this plan are “grandmas and grandpas who cannot get up the hill.” Hmm.

A Sept. 4 letter in the Sun Current from an initial supporter explains why, on further reflection, this development is neither fiscally sound nor well-designed.

What this debate is really about is fiscal responsibility. The City itself did not identify Nordic skiing as a strategic priority of any level in its current plan. Residents didn’t come asking for it either. The Edina Parks and Recreation Board did not recommend it. Existing facilities, infrastructure and other assets are desperately in need of upkeep -- nearly $50 million in deferred Capital Improvement Projects over the next five years. But the City will tax us to spend $3 million for a winter recreation facility? And after a controversial $189 million (plus interest) tax referendum was pushed through in 2015 by a narrow margin?

We’re asking the Council to vote “NO” as a way of restoring fiscal responsibility and stewardship of our tax dollars. We hope you can join us.