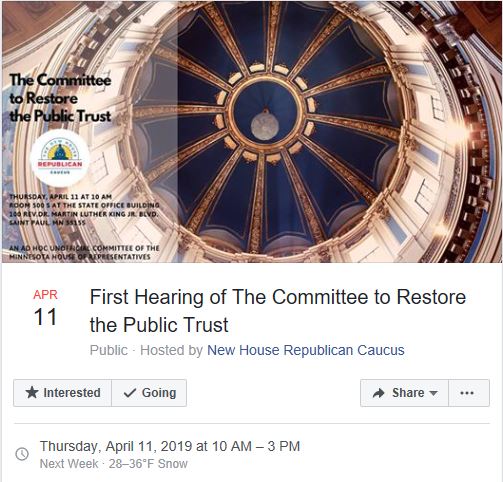 Allegations of major fraud in the Child Care Assistance Program (CCAP) will be the focus of the first hearing of the bipartisan Committee to Restore the Public Trust.

Minnesota Legislative Auditor James Nobles and his team will open the testimony with a report of the Office of the Legislative Auditor (OLA) on claims that about half of the state’s $250 million spent on CCAP is consumed by illegal diversions of up to $100 million per year.

Commissioner of Human Services Tony Lourey has been invited to comment on the OLA report and to describe the Walz Administration’s efforts to improve oversight of state spending on child care services provided through the Department of Human Services (DHS).

“This oversight panel is being formed to deliver results from state audits,” said Rep. Steve Drazkowski (Republican-Mazeppa). “Recommendations for reform are meaningless unless there is follow-through from the Legislative Branch and the Executive agencies.”

“We legislators want to work with the Governor and his team to protect the taxpayers from waste, fraud, and abuse,” he continued. “Both parties want to make sure that money is spent where it is intended, instead of being grabbed by people for whom it was not.” At this point, a bipartisan group of ten state Representatives have expressed interest in attending the committee’s first hearing.

At this point, a bipartisan group of ten state Representatives have expressed interest in attending the committee’s first hearing.