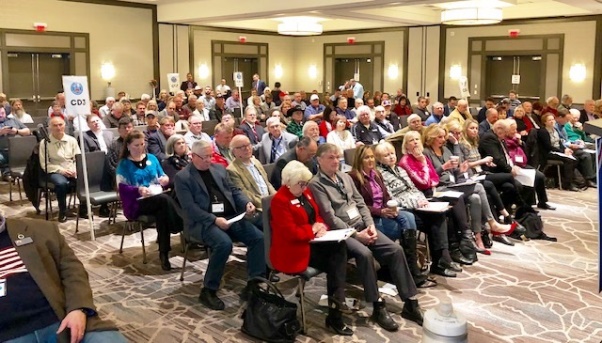 Congressional District 3 has announced its convention on Saturday, March 20, will be held remotely by Zoom. The call for the convention has been issued to delegates and alternates elected during senate district conventions held in 2020. Those that wish to attend must register by 10:00 am, Wednesday, March 17. Attempts to register after that date will not be accepted.

Congressional District 5 will hold its convention on Wednesday evening, March 24. It will also be held as a Zoom webinar. As with the CD3 convention, CD5 has officially issued its convention call to its delegates and alternates. The deadline to register is Sunday, March 21, at 7 pm.

The CD3 convention will open on March 20 at 8:30 am for sign-in. It will convene at 10:00 am. Besides Zoom, CD3 will be using CVote for registration, credentials, and remote voting. This is the voting approach designed by CD3’s own Sam Adjei and successfully used for the recent SD49 Republican convention.

Sign-in for the CD5 convention will open at 6:00 pm on March 24. The convention will convene at 7:00 pm. Zoom will be used as an audio/visual link. The method of voting will be determined by MN GOP, which will be facilitating the convention.

The following CD5 executive positions will be elected at this year’s convention. Individuals interested in running for CD5 executive office may still make that intention known by contacting Michael Hammond at [email protected]. The deadline is Friday, March 19. No nominations will be allowed from the floor of the convention.
• Chair – Paul Anderson (SD59) is unopposed
• Vice Chair – Jake Moroshek (SD46) is unopposed
• Secretary – Kristen Kukowski (unopposed)
• Treasurer – Michael Hammond (unopposed)
• At Large Exec Officers {3 seats open)