RNC Wrap Up - Reports from the MN Delegation

We ask several people from the MN Delegation to the Republican National Convention to tell us about the experience.  Here are links to their reports.

David Asp –  Impressions as a Delegate

Randy Sutter attended the RNC as a guest, and sent back these reports. We've added a post-script linking to an analysis of Donald Trump's acceptance speech published by the Star Tribune on July 24.

The Republican National Convention has convened. As expected, my perspective is from the top of the Quicken Arena, at the same elevation as the Jumbotron. Having kicked things off, the members of the Rules and Platform Committees were called to meet during the day on Monday, and the rest of us listened to speeches by Cleveland leaders and RNC officials, interspersed with some live rock music. All the real work went on in the Committee meetings.

One lesson that I'm taking away is if we want to influence how our national party is run, we really need to pay attention to who we elect as our MN party chair, our national committee woman and man, and the delegates we elect to the national convention at our CD and state conventions.

David Asp was a delegate to the Republican National Convention for CD3. Here are few excerpts from the daily notes and photos he sent from Cleveland. He also sent some insightful details about the rules committee and the “conscience clause” proposal, which we’ve placed separately on the SD49 website HERE.

TUESDAY, JULY 19
Yesterday was the first day of the Republican National Convention. We dealt with convention business in the early afternoon before moving into convention speeches last night. The theme for Monday was “Make America Safe Again,” focusing on homeland security, national security strategy, and foreign policy. 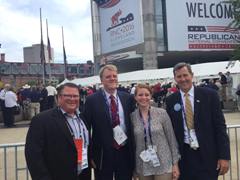 Monday’s speakers featured Melania Trump, along with notable speakers like Sen. Joni Ernst, and Sen. Tom Cotton. In my opinion, the most interesting speech of the night came from former-Mayor Rudy Giuliani who argued for a stronger national security policy.

The Minnesota delegation is seated in the back of the arena in front of the media booths. If you’re watching coverage of the convention, you may see familiar faces walking around behind the news anchors. 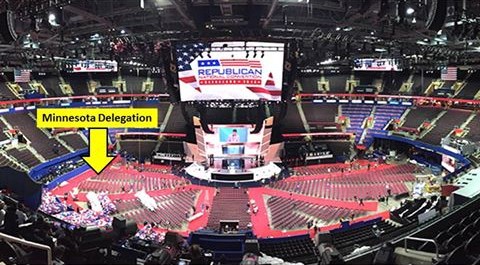 Here’s a picture of the convention floor showing where the Minnesota delegation is seated:

David Asp was a delegate to the Republican National Convention for CD3. Here are few excerpts from the daily notes he sent from Cleveland, detailing his work on the Rules Committee.

Welcome to my first convention update from the Republican National Convention in Cleveland, which begins today.  When I was asking for your vote to be a convention delegate in April, I pledged to provide daily updates from the convention.  This update provides my perspective on the rules committee, and – in particular – the “conscience clause,” which has received significant attention during the weeks leading up to the Convention.

The Republican National Committee (“RNC”) has three representatives from each state – the party chair, national committeeman, and national committeewoman.   As I’ve focused on learning more about how the RNC operates during the last few weeks, I’ve come to appreciate the work of our three RNC representatives – Chair Keith Downey, Chris Tiedeman, and Janet Beihoffer.  The RNC has its own standing rules committee, and Janet ably represents Minnesota on that committee.

The Convention committee considered several amendments relating to whether Convention delegates should be bound to vote for a presidential candidate based on the results of primaries and caucuses in their states.

Doug Seaton attended the Republican National Convention last week as a Delegate, and captured his impressions on the plane ride home to MN.

Minnesota’s delegation represented the diversity of Republicans here – men and women from all geographic areas of the state, a wide range of occupations, ages, and ethnic backgrounds. There were supporters of Rubio, Cruz and Trump, as well as those who’d initially supported others from the starting field of 17 candidates.

We are united in defense of:
Liberty
The Constitution
Limited government
Free enterprise
The right to life, liberty and the pursuit of happiness

We are united in support of:
Competence in the War on Terrorism
Our military
Our police officers
The rule of law

We are united against:
Rule by bureaucrats or Union bosses
Crony capitalism
Those who seek to pander to race and class hatred & divisions

Meeting a week later, the Republicans in Congressional District 5 endorsed Frank Drake as their candidate for the U.S. Congressional seat currently held by Rep. Keith Ellison.  Drake is currently the co-chair of Edina Precinct 04 in Senate District 49.

Congratulations to the New Delegates and Alternates!

At our recent convention, 121 Republicans in Senate District 49 were elected Delegates and Alternates to upcoming conventions.   All 34 precincts are represented.

Final preparation is underway for our Senate District 49 bi-annual endorsing convention.  Every two years, Republican delegates and alternates that were elected in Senate District 49’s caucuses come together to endorse candidates, elect delegates and alternates for Congressional District and State conventions, and debate resolutions to the Minnesota Republican Party Platform.   This year, we meet at Olson Middle School in Bloomington on Saturday, April 9.

The Resolution Committee has consolidated and formatted the submitted resolutions.  The Convention Rules Committee has updated the rules for running the convention.  The Candidate Search Committee is wrapping up its interviews with potential candidates.  Registration, Credentials, and Convention Planning teams have met to ensure everything runs as smoothly as possible.

If you are were elected a precinct delegate or alternate in Senate District 49 and you haven’t registered yet, please go out to the SD49GOP website.  To register, please CLICK HERE.

There is still work required to assemble the delegate packets and the name tags on Thursday evening, April 7,  and to set up the auditorium on Friday evening, April 8.  If you can lend a hand, your help would be appreciated.  Please contact Randy Sutter at 952-835-8917 to get the times and places we’re working.

How to Become a Convention Delegate - Congressional District or State

This Saturday, April 9th, our Senate District will hold its annual Convention. It will be attended primarily by the Delegates and Alternates elected at the March 2016 caucuses from those precincts lying within the boundaries of House Districts 49A and 49B.

Included in the purpose of our Convention is

The Bylaws of Senate District 49 call for a Delegate Nominating Committee to meet ahead of the SD 49 convention.

Deadline for Platform Resolutions was March 31

Platform resolutions are an important part of the proceedings of our Senate District 49 convention.  Several resolutions were submitted, considered and approved during the March 1 caucuses.  These have been carefully transcribed and, where appropriate, consolidated with similar resolutions for further consideration by the delegates at the upcoming convention.

The rules of past conventions have permitted additional resolutions to be submitted as late as 30 minutes after the convention has convened.  These last-minute additions have added to the difficulty of treating resolutions in an orderly, well-organized way.  This year, we are implementing a change to the process of accepting Republican platform resolutions.  Our objective is to avoid handling the resolutions at the end of the convention agenda, rushing their consideration and risking adjournment without debating or voting on some or all of them.