CPAC in MN Informs and Inspires 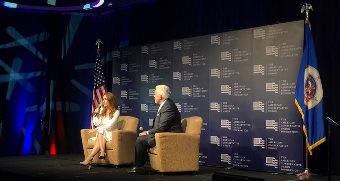 On September 11, 2019 hundreds of MN Republicans and Conservatives gathered at a four-hour CPAC Minnesota event hosted by the American Conservative Union (ACU) Foundation. In response to MN Rep. Ilhan Omar’s “Some People Did Something” comment, the speakers reflected on the 9/11/2001 attacks on the USA.  They highlighted and celebrated the heroism of first responders and citizens around the country then and in the 18 years since. They also discussed what’s happening today that threatens freedom, and advocated thoughtful actions to counter those threats.

Congressman Jason Lewis, newly announced candidate for US Senate in MN, spoke resoundingly in support of the Constitutional limits imposed on the Federal government, including the vertical limits reserving powers to each of the States, or to the people, and gave the historical context for those.  “Due process, the rule of law, the presumption of innocence, probable cause / warrants for wire taps and all the procedural safeguards that are in that little piece of paper that keeps us free (the Constitution) are on the chopping block” when today’s Socialist-advocates, who believe the ends justify the means, are seeking power.  The Constitution is ignored.

Congressman Lewis also got some of the biggest chuckles of the evening when he referred to “the Squad” as a group that makes Nancy Pelosi look like a moderate, and the MN Congressional delegation (with one exception) as “the greatest collection of misfits since the Star Wars bar scene.”

Views of the current political scene and the upcoming 2020 elections were interspersed throughout the evening.

In addition to investigative reporter Sara Carter and ACU Chairman Matt Schlapp, pictured above, the 18 panel participants included thoughtful writers and activists from across the country.

With so many informative and inspirational speakers, the evening moved by quickly.  A brief break for dinner and a post-event social hour gave ample opportunities to meet interesting fellow Minnesotans.

We've provided a link to the event video below, along with a list of the speakers and timestamps to help you more easily navigate.

A video of the event is available, CLICK HERE starting with opening remarks at the 20-minute mark (late start) and with pauses between segments. Speakers / topic titles are indexed below with timestamps to help you navigate. In the video, the CPAC Minnesota banner appears between segments and during audience questions (Audio-only for questioner, video resumes for responses).

20:00 Into - Emcee for the evening, Ian Walters, ACU Communications Director.

22:50  “Leveling the Playing Field:  The Left’s Technology Threat and What We Can Do About It”, Lisa Schneegans, Right Tech Pac. Included product-announcement and very early demonstrations of an app/tool for campaigns to leverage connections with their supporters and social media.

1 hr. 17 min.  9/11 Remembered Matt Schlapp, American Conservative Union Chairman (who was working at the White House on 9/11) and Rob O’Donnell, NYPD Detective, retired (who was on duty in NYC on 9/11).  Moderated by Ian Walters, ACU Communications Director

“One of the things we are seeing is an absurd effort to rewrite and subvert American History and we are seeing this at the highest levels of our culture,” John Hinderacker

“Hold Muslim candidates accountable.  Ask the tough questions and don’t allow claims of “Islamaphobia” to side-track/dodge the questions. Ask about the candidate’s views of theocracy and the Muslim Brotherhood.  We can do better than the candidates that are being raised up now as “representatives” of our people.”  Dr. Zuhdi Jasser.