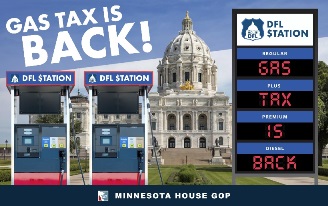 Minnesota has a projected surplus of more than $4 billion. Yet DFL legislators in the House have released their Transportation Omnibus bill that would hike transportation taxes and fees by more than $1.5 billion over the next four years.

None of the proposed Transportation tax and fee hikes have been heard in committee this year. They just appeared in the omnibus bill.

• Linking the gas tax to the Highway Construction Cost Index. Result: a five-cent per gallon increase over four years -- $350 million of new taxes
• Half percent increase in the Metro Sales tax to pay for light rail and other transit -- $916 million of new taxes over four years
• Increases in registration and tab fees, and an increase to the Motor Vehicle Sales tax – hundreds of million in new taxes and fees

The DFL House also dropped their omnibus Tax bill last week. In addition to the $1.5 billion tax and fee hikes in the Omnibus Transportation bill, the Tax bill raises taxes by another $1 billion. At a time when businesses are suffering from Gov. Walz pandemic restrictions, the DFL bill will not fully protect businesses from tax hikes on forgiven loans under the Paycheck Protection Program (PPP). The federal government gives, the state government is eager to take away.

Despite the state budget surplus and billions of dollars more coming from the federal government, the DFL House wants to raise more taxes on business and families. Republicans are trying to provide relief to businesses and families facing a slow economic recovery, but the Democrats are holding the relief hostage in their push for more than $1 billion in unnecessary tax increases.