Did You Know? You Worked Until April 25 for MN 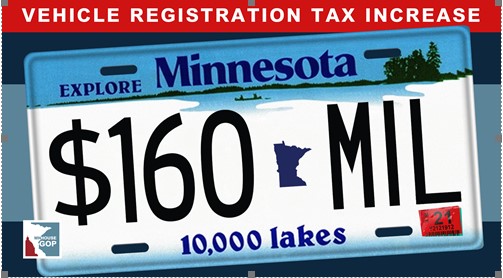 The Tax Foundation has released its latest “Tax Freedom Day” rankings. This is the day when workers have earned enough to pay their taxes for the year.

Even before any of the DFL's proposed tax increases would be put into play, Minnesota comes in at #46. We work until April 25th just to pay our taxes. This is later than residents in ultra-liberal California and Massachusetts!

Minnesota is currently sitting on over $1.6 billion in over-collected taxpayer money. That is on top of another $2.4 billion dollars of over-collected money that is sitting in a special reserve fund. In addition to this, the federal government is showering Minnesota with another $8 billion in funds from the American Rescue Plan. Despite this, Democrats in the House still want to raise taxes on Minnesotans by another $1 billion.

The Minnesota House debated ten different omnibus bills on the House floor, including the Tax Bill, Public Safety Bill, State Government Bill, and many others. There were many long floor sessions and hundreds of amendments debated. By the end of the week, the DFL House leaders had passed all but one of their initial budget bills off the floor. Their bills contain billions in tax hikes and massive new mandates that will raise energy costs, hurt businesses, and make Minnesota even more unfriendly for job-creation project.

TAXES:  They are holding bipartisan relief for businesses and workers hostage to exchange for that billion-dollar tax hike. Minnesota has a $4 billion surplus, and there's bipartisan consensus to pass Paycheck Protection Program/Unemployment Insurance relief. Instead of working together to help Minnesotans, Democrats are using businesses and workers as leverage as they push for partisan and unnecessary tax hikes.

TRANSPORTATION:  Democrats are raising billions in gas tax and other fee increases when Minnesota has a $4 billion surplus.

PUBLIC SAFETY:  Democrats are pushing one-size-fits-all policies opposed by Minnesota's largest law enforcement organizations. These policies were crafted by activists who want to defund the police instead of working with law enforcement to ensure Minnesotans of all background feel respected and protect by law enforcement.

COMMERCE/CLIMATE/ENERGY: Democrats policies have driven Minnesota's energy rates from some of the cheapest to among the country's most expensive. Their Commerce/Climate/Energy Omnibus would raise energy prices by imposing costly mandates that grow the bureaucracy and limit Minnesota's energy options. 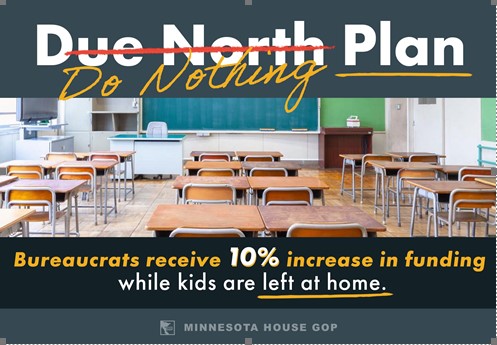 EDUCATION: Democrats are putting bureaucrats ahead of students and have zero plan to return kids to full-time in-person learning or to make up for the lost academic progress after a year of distance learning. Their bill gives a small increase to the classroom but gives bureaucrats a 10% boost in spending.