Starting early this election season, we are emphasizing “door knocking” over “literature dropping”. The simple reason is that actual human-to-human contact provides better election return results and can be the difference between winning and losing in close election races. There are expected to be a number of close races this year, so Republican volunteers have the opportunity to directly influence the results in these races. 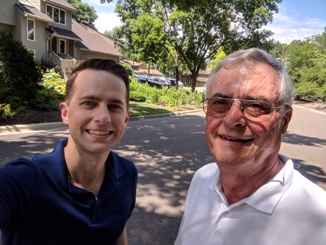 Noah Harber, pictured here with me on a beautiful summer Saturday, is one of 18 other SD49 Republicans that have been willing to devote time to knocking on doors in our senate district. Mike Barg, Sean Boylan, Nancy Carlson, Steve Curry, Kathleen Dick, Noah Harber, Tom and Linda Hulting, Dennis Hykes, Sheri Johnston, Ted Lockhart, Mike McNeeley, George Mueller, Al Muerhoff, Vince Riehm, Linda Steen, Randy Sutter, and Penny Walters have walked at least one stint for our endorsed candidates.
Several of these volunteers turned out in support of the Republican National Committee’s “Day of Action” on July 29. Aaron Waaraniemi, the RNC Field Director in Congressional District 3 (CD3) reported that “the state director of our field program and the Executive Director of the Minnesota Republican Party were very pleased and impressed with the work you all put in.”

“We set the new statewide 2018 record for voter contacts in a day.” CD3 was the single largest contributor, and SD49 turned out the most volunteers within CD3. “We can do great things when we have that many people giving even a couple hours over the course of a weekend.”

My commitment to door-knocking is based on personal experience. I am recent transplant from the West Coast to Minnesota and SD49 and am now a Precinct Co-Chair in Bloomington Precinct 17. I have seen the positive results of door knocking first hand. I helped develop and execute a door knocking strategy for a California state assembly race and I saw the results—a verifiable, positive difference in votes for the candidate. Although the candidate lost due to the large disparity in Democrat vs Republican registration in the district, I was impressed with the criticality of human contact with voters and the potential for the type of volunteer contact to influence elections.

In that assembly race, precincts were targeted for either one or two door knocking contacts between July and October. The goal was to maximize Republican voter turnout and provide information on the highly qualified candidate to influence Independent voters. To meet these goals, volunteers on these walks knocked on doors of both Republicans and Independents, talked with voters about the Republican candidates, answered questions, and left candidate literature with the household.

As a result of my experience, I believe in door-knocking and have already been hard at work with other volunteers in SD49. I have visited several hundred households already this election season.

We need to build to an even more impressive volunteer effort to make a difference in the General Election. There will be calls for more door-knocking, literature dropping, and lawn sign installations in the next three months. This is the grass-roots effort that will be required to overcome the financial advantages posed by our DFL opponents. If you agree that we need to get Republicans elected to local and state government offices, please volunteer to work with us. CLICK HERE or call our office at 612-470-9200 to give us your contact information and when we can get in touch