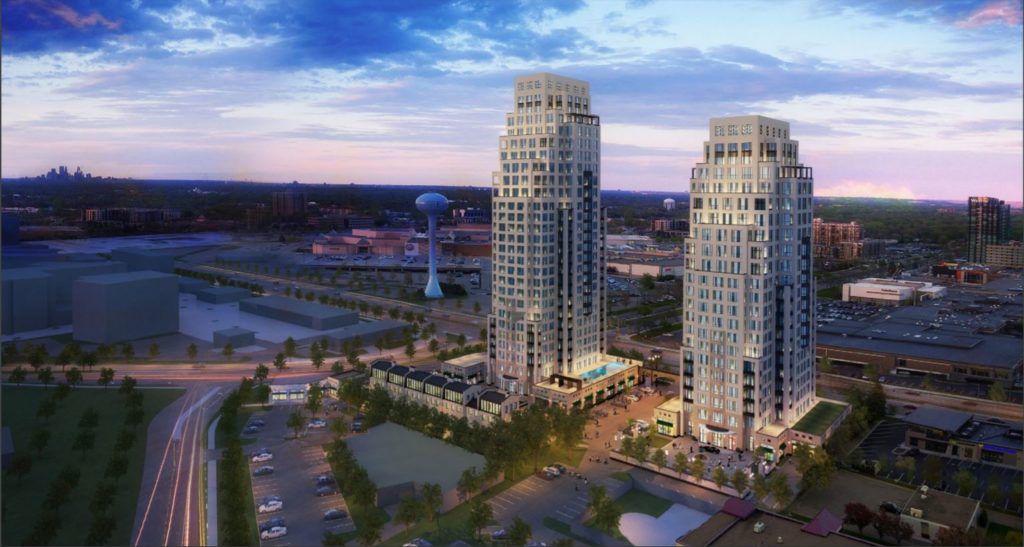 Because alert neighbors got involved, a recent developer proposal to build a 26-story building and 22-story building on the West side of France Ave at 69th Street (6900 / 6950) was not approved by the Edina City Council at a lengthy October 17 hearing.

It appears this may not be the last time Cornelia neighbors, other Edina residents, City Staff and the Council themselves will suffer such undue stress. During the past 3 years, instead of saying “NO” up-front to out-of-scale projects that don’t conform to the Comprehensive Plan, the Mayor and Council have shown willingness to consider significant variances.

Edina’s Cornelia neighborhood began to develop in the mid 1950’s at the same time Southdale Center was being built.  From the beginning, City planners recognized the need to transition from the commercial interests along France Avenue and the residential neighborhood to the west. For the five blocks between 69th Street & Gallagher Drive, the Comprehensive Plan set upper limits on total height (4 stories / 48 feet) and density (30 units per acre). Over the last 60 – 65 years, the Cornelia neighborhood has not receded.  Nor has the need for a transition from the commercial to the residential gone away. The Cornelia neighborhood now has well over 1000 single-family homes and a collective real estate value easily worth $600 - $750 million.

The reasonably defined transition area that has served well since the area began to develop in the mid 50’s is still in place.   But it has increasingly been the target for developer requests for variances.

Part of this is due to a drive toward “affordable housing” goals as set by the Met Council and accepted by Edina’s strategic planning process.

That seems to have been the case in 2014 for the 5-story mixed retail and high-density residential Boisclair proposal at 7200 France. That project was rejected in early 2015.  The "Crossroads Project" is now being proposed for the site.

It is not the City’s responsibility or obligation to allow a developer to overbuild when the developer was willing to pay multi-millions more for a site than its valuation.  However, in fairness to developers, the City staff and officials need to more clearly signal intent to adhere to the Comprehensive Plan.

At the lengthy, more than 6.5 hours, October 17, 2017 Council meeting the hour-long project description begins at the 59-minute mark of the video  and 3 hours of resident comments start at the 2:08 mark.  Ryan Co. claimed they had substantial neighborhood support for the project (listed at 1:41 mark of the video).  However, there were over 700 Cornelia residents who signed a petition in opposition asking the Council to “Adhere to the Comprehensive Plan with Transition and Four Story Building Height Restrictions.”

The Mayor started out the Council's comments by throwing the 1000-homes of Cornelia neighborhood under the bus, saying that the benefit to Edina (of granting the variance) outweighed the potential adverse effect on the quality of life of in the neighborhood. (His comment is at about the 5:29:07 mark of the Council meeting).

In the end, four Council members said they couldn't get behind a skyscraper next to a single family neighborhood.  But they also seemed unwilling to adhere to the 48 foot height and density limits that have served the area well since it was developed. (see note * below)

We don't know what will happen next.  Presumably there will be another proposal from Ryan Co.  for 6900/6950 France, although per the StarTribune article summarizing the meeting, that may not be soon.  And the Crossroads Project being developed for 7200/7259 France will probably be making a request to amend the Comprehensive Plan. A preliminary version briefly submitted and then withdrawn in July 2017 showed 6 and 14 stories.

Cornelia neighborhood residents, and everyone who uses the heavily-travelled France Ave. area roads, hope their elected Edina Council will continue to stand firm -- protecting residential neighborhoods and making the neighborhoods the priority as redevelopment comes to Edina.

* Of note, for comparisons, here are other France Ave properties which comply with the Plan but which theoretically could be redeveloped (Year built / address / height / description):