On Thursday, October 27, a group of Concerned Edinans -- primarily women -- stood with Pat Maahs at the Edina Community Center, where both the local Democratic and Republican parties have their offices, to call for new leadership for House District 49A.

Maahs is a victim of sexual assault, and worked to pass a new law to clarify and strengthen Minnesota’s sexual assault laws. During the House of Representatives debate of the bill, Rep. Ron Erhardt, DFL-Edina, made a number of joking statements about sexual assault while Maahs was in the House gallery. Maahs spoke briefly at a news conference Thursday to share her story with the community, and call for new representation in Edina.

“As residents of Edina, we were shocked to hear Pat’s story, and disgusted that our State Representative would make light of an issue like sexual assault,” said Molly Cronin. “We stand with Pat and believe Ron Erhardt’s actions don’t reflect our great city and have no place in public discourse. It’s time for a new representative who can be a positive voice for Edina, and not embarrass our community with inappropriate behavior.”

The Edina residents believe Erhardt's behavior has become increasingly unacceptable. In 2014, he told an interest group he would "blow their head off," and was condemned by colleagues on the House floor twice during the past two years session; once for a bizarre speech making light of the state's bird flu crisis, as well as the incident involving Ms. Maahs.

A video of Representative Erhardt's behavior on the House floor is available. 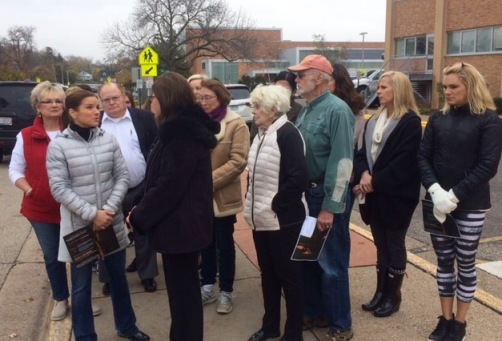