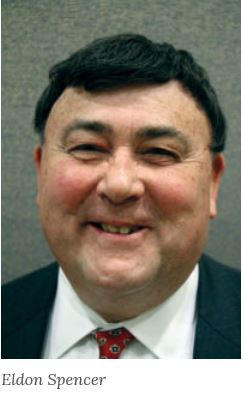 The Bloomington City Council voted in mid-February to appoint Eldon Spencer to fill the open council seat representing District 2 in the southwest portion of the city.  The appointment will span from March to November, when the residents of District 2 will have the opportunity to vote in a special election.

Our Senate District 49 Republican organization has also benefitted from Eldon Spencer’s leadership.  He has been the co-chair of Bloomington precinct 21 and a delegate/alternate to Congressional District 3 and State conventions.  Eldon intends to step down as precinct co-chair as soon as a replacement is confirmed.

Some of Spencer’s positions on initiatives being considered by the Bloomington City Council were highlighted in an article by Mike Hanks in the February 23 issue of the Bloomington Sun Current.

Regarding the options for a community center, Spencer felt that the existing Creekside Community Center would likely be difficult to maintain.  “The existing facility has lots of physical problems that are only going to get worse.”  However, he felt that a better analysis should be done regarding the use of facilities available within Bloomington’s private sector or in neighboring communities.  If the city does need new options, he asked, would those needs “be best served through a central facility or through decentralized facilities?”

Regarding the viability of a paved state trail through the Minnesota River valley, the new council member asked to study the issue more.  He said that he would be looking for a balance “between the uses of a natural area so that it meets the needs of those who want a wilderness area that only the vigorous can access and those who need the use of a paved trail in order to have access.”