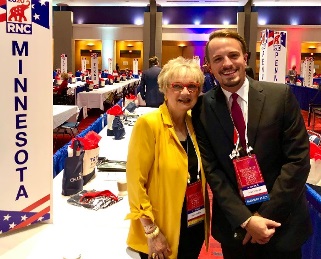 I’ve been reflecting on the days of my first Republican National Committee (RNC) meeting, and our Convention in Charlotte. They were more than memorable, culminating with the nominations of Vice President Pence and President Trump for their second terms. Each of them brought the house down when they arrived at the Convention Center to the repeated chants of “FOUR MORE YEARS!”

Six people from every state and territory traveled to Charlotte — far fewer than when the Convention was originally planned. Minnesota was represented by Mike Lindell, the Chair of our Delegation; Jennifer Carnahan; outgoing Committee members Janet Beihoffer and Rick Rice; and CD 2 Chair Jeff Schuette and me, who were each Delegates and served on the Credentials Committee. It was Mike Lindell’s voice you heard announcing that Minnesota’s 10 votes were going to our next President, Donald J. Trump!

Like Minnesota, “COVID” had its grip on Charlotte. Many businesses in this beautiful city were closed, and many permanently. What a sad state of affairs when one observes what’s being done to this city — and our country — economically. On the other hand, we experienced the wonderful work of the Charlotte police, as they worked to keep us and the city safe. Yes, there were marches and protests, but none got terribly out of hand.

For us, it was a time of meeting and making new friends and connections; becoming more familiar with the workings of the RNC; and working to represent our state. Max Rymer and I (in photograph above) assumed our new positions as National Committeeman and National Committeewoman at the last meeting on the day before everyone departed Charlotte.

I do not take my new role as National Committeewoman for granted, and I intend to honor the commitments I made to you when you elected me.

The night before leaving Charlotte, those of us attending the RNC meetings were stunned to find invitations from President Trump in our e-mailboxes! We were asked to be a part of the audience for the President’s nomination acceptance speech the following Thursday. With a two-day turnaround, it was off to Washington, DC! 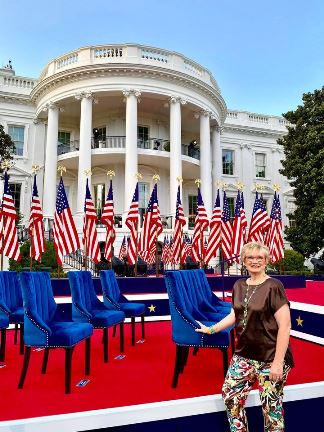 For 14 years, I called Washington DC my home; six years with my parents while my dad was stationed at (then) Andrews Air Force Base, and eight years with my husband Randy during his military career. So it was an absolute honor and privilege to be seated on the South Lawn — representing Minnesota as part of the RNC — and listen to President Trump’s speech on Thursday night at the White House. We were able to hear the other speakers, watch the pageantry, take in the music, and be dazzled by those incredible fireworks!

Sadly, however, there was also another side to what had been a most memorable night Out-of-control rioters practiced mob rule on the streets around the White House, moving from one location to another. The police did their best to always stay one step ahead of them.

What had been a 5-minute walk for us from our hotel to the White House, as we headed over earlier, turned into a 1 1/2-hour circuitous journey back. We were guided by police & agents as to the route we should follow. Finally, we so appreciated being accompanied by some of the southern US border guards, who walked the last blocks with us towards our hotel. God bless them for helping us to safety! We certainly fared better than did Senator Rand Paul and his wife that night, as you’ve no doubt witnessed and heard in the media.

From beginning to end, it was an unforgettable 36-hour trip. I will never lose the overwhelming feelings of patriotism I have owing to my love of our country. May God bless America and President Trump, who continually fights to protect these United States and what they stand for!!! 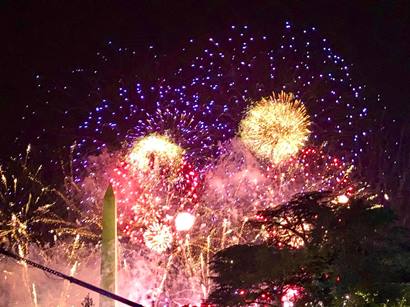