The “Fall Conversation” held on November 16 at the Edina Country Club proved to be a frank and insightful discussion of the recent election and where we, as Republicans, need to go from here. The panel came well-prepared and led off with a number of key observations.

• We lost some very good Republican legislators in the metropolitan area. Democrats and independents voted pretty much along DFL party lines. They did very little vote-splitting. Republicans were more apt to cross over to Amy Klobuchar. “When the tide swept through, a Republican candidate had to be on a tall tree to survive.”

• The DFL message was more inclusive. It was effective in targeting suburban women. It didn’t focus on the economy – the economy has been so good, it became a non-issue.

• The Democrats' 50-state, focused, coordinated, and repeated lie about Republicans removing healthcare coverage for pre-existing conditions stuck. It was not effectively countered by our State Party or candidate messaging. While repeated positive messages of how Republicans help people meet basic needs may be a buffer, we also need to have plans and funds in place to counter whichever emotional scare-messaging the Democrats choose next time.

• Where was the communications for the Republican Party? We didn’t have a message. The DFL painted the Republican brand as negative. We didn’t explain who we are and what we are for. Consequently, we were identified as racist and anti-immigrant, and it stuck.

• Walz was able to flip more Trump voters to his side than Johnson was able to flip Clinton voters to his. Walz’s approach involved more emotion, more stress on credibility. He did not challenge their thinking; he made them feel good about what they already think. These “feel good” areas included climate change, health care, light rail.

• Starting now, we need to work hard. We need to fight. We cannot give up the Twin Cities metropolitan area and expect to win in Minnesota. We need the right message, messengers, and money.

• SD49 has been recognized for its strong speaker programs highlighting issues and actions of interest to metro area voters. These programs have attracted people from outside the senate district seeking a relevant form of Republican activism. Regularly scheduled speakers supplemented with the more social “Pints & Politics” networking events can serve as a strong model for outreach and growth in other core metro area districts.

• Our brand needs to reflect a positive “experience” – not what we are against, but what a conservative majority of our neighbors are for. For example, we support an effective, affordable health care system that is market based and competitive while covering pre-existing conditions and college-age dependents. We had it before. We know how to do it. We will do it again. 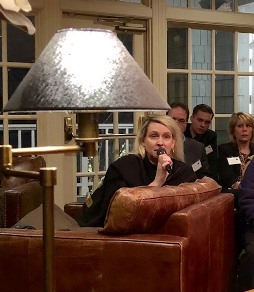 • We need to build a bench. At the local level, focus on the non-partisan races. Find people in their 30s and 40s who are passionate about local issues in their communities and in their schools and build support around them. To support these candidates, we need to work now to get city-wide lists of contacts with email addresses. Electronic communication is cost-effective. We also need to improve methods for producing local full mailing address lists quickly from our state-wide data. This year it was a time-consuming technology challenge since Edina is in multiple school districts, US Congressional districts & MN House districts, and Bloomington is also in multiple MN House & Senate Districts.

• Few young people are openly Republican. Young people get their information primarily from social media. We need our own team of bloggers – a larger, louder blogging team to promote our point of view

Our panel responded to a number of questions and comments from over 60 attendees.

The three panel members were :
• Julianne Ortman, former Deputy Majority Leader of the Minnesota Senate and current Chief of Staff of the Hennepin County Sheriff’s Office
• Matt Dean, current state representative representing portions of Ramsey and Washington counties and former Majority Leader of the Minnesota House from 2011 to 2013.
• Howard Root, a former corporate lawyer, entrepreneur, and CEO of Vascular Systems, a medical device company that he founded and sold. He provided the “outside” perspective on the panel.

Max Rymer was the able moderator. He is the founder and head of the social media company Nativ3, the host of the community television program Republican Roundtable, and contributor to various podcasts and radio talk programs.

The Fall Conversation proved to be an energizing discussion as well as a successful fundraiser. In addition to our panel members and moderator, we want to thank Dan Condon, owner of United Liquor in Bloomington for an enlightening wine tasting and Amy Huston and the staff of the Edina Country Club for their great hospitality.