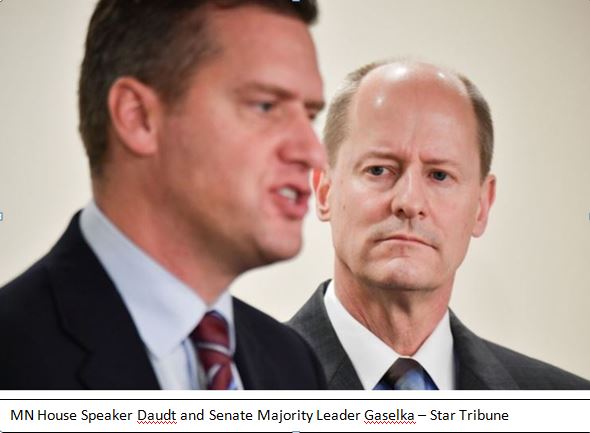 Republicans who control the MN House and Senate will be asking DFL Gov. Mark Dayton to sign off on a two-year budget worth about $46 billion.  Tax increases passed when the DFL held a majority in both houses are now projected to bring in $1.5 billion more than is forecasted to be required to fund the state government in the 2018-2019 biennium if no new spending initiatives were approved.  Republicans plan to deliver $1.15 billion of that surplus back to taxpayers in tax cuts or credits.

While the 2017 Republican budget increases funding to education, it also makes cuts to state government agencies and environmental work.  It would provide for significantly less than Dayton wants for schools, transportation, and health and human services.

As Rep. Jenifer Loon, Eden Prairie-R, pointed out in a recent column she wrote for the Eden Prairie News, Republicans have accomplished much this session:

The Star Tribune made clear, in an article published on April 29, that the DFL does not see the $1.5 billion as “surplus”.  The DFL are seeking large increases to education and health & human services.  If those increases are not approved, DFL leaders claim that “cuts” will be required to vital services.  “I would caution my Republican friends:  We have a $1.5 billion surplus,” Senate Minority Leader Tom Bakk, DFL-Cook said.  “You will never be able to explain to Minnesotans why you couldn’t get your work done on time when we have plenty of money to fund state government for the next two years.”

The Star Tribune article also quoted Gov. Dayton, “We’ve got some very significant differences on policy matters as well as the budget, and that’s going to be very difficult to resolve.”