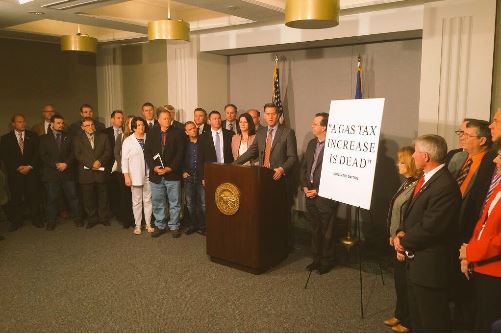 Little progress has been made public on the transportation bill, tax relief, or the bonding bill.  Instead, the media has recently printed a number of claims and counter-claims.  Republicans want to prioritize spending and limit borrowing to sustainable levels.  Gov. Dayton and the DFL-controlled Senate, with support from the Star Tribune, continue to push for major increases in the level of state borrowing.

The Star Tribune has increasingly made clear its support of the DFL spending proposals, shrugging off concerns over significantly higher state debt:

Yes, it’s that “and more” that is always troublesome.   Torkelson (chair of the MN House Capital Investment Committee) and Vogel (chief author of the debt cap legislation) point out that we are already spending $750 million every year in required debt payments.   Debt service is among the fastest-growing categories in the general fund.

The average size of the bonding bill in the past 10 even-numbered years has been $800 million.  The proposed cap would keep it at about that level.  The DFL-controlled Senate has proposed borrowing at twice that level.

It would seem prudent to ask how much we want to pay in the future.  The Star Tribune noted that in 2015 MN spent 3.7% of the general fund to service our debt.  That level placed Minnesota “30th among the states.”  It would seem that Minnesota was pretty much right in the middle of the pack.  The Star Tribune noted that the national average was 4.3%.  If that is the average, we can only imagine what the rates are that the higher-spending states are obligated to meet.  Do we really want to emulate their achievement?

The arguments made by the Star Tribune at least did not repeat the claim made by the Senate Democrats that spending $1.5 billion in borrowed funds would lead to 40,000 jobs.  As pointed out by WCCO, that’s a lot of jobs.  WCCO’s Reality Check team noted that the billion dollar Viking stadium only generated 7,500 jobs.  They went on to say that “It’s more jobs than every business in the entire state of Minnesota created in the last year (35,940).”  They concluded that the Democratic jobs claim was “outdated, and inflated.”

The bottom line is that legislation to cap the debt service out of the general fund would not be needed if the Governor and the DFL leadership in the Senate prioritized Minnesota’s Capital Investments needs.  Republicans will support a rational level of borrowing, supplemented by spending of some of the current $900 million budget surplus.

Let’s work together to develop a 10-year Capital Investment plan that can be supported by a sustainable level of borrowing.

While the $900 million budget surplus has inspired the leadership of both the Republican House and DFL Senate to propose varying amounts of tax relief, neither chamber has committed to returning all of it.  It is very likely that much of the DFL tax rate increase of 2013 will remain in place.   If the House is successful this session in holding general fund spending within the limits set in 2015, it would not be surprising to see a surplus going into 2017.  The outcome of this year’s legislative elections will determine how much of that surplus is returned in further tax relief.