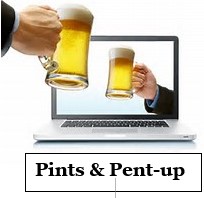 Southwest metro Republicans held their fourth Pints & Pent-up Zoom meeting on June 8 with a stellar group of candidates and campaign representatives on board.

Thomas Knecht of the Kendall Qualls campaign led off describing volunteer opportunity to write and send out post cards to introduce Qualls to neighbors and friends.

Brad Aho followed, pointing out we should all be concerned about the long-term consequences of defunding the Minneapolis police. He said that our help would be important in ensuring that he finishes at the top of the upcoming Hennepin County District 6 primary.

Lacy Johnson, Republican-endorsed candidate for US Congress, was our featured guest. He said that he will be working hard to give voters in the 5th Congressional District a clear alternative to Ilhan Omar. He reported that the lack of DFL condemnation of the looting and property destruction in the south Minneapolis business areas has been particularly telling. He would appreciate the names and addresses of anyone that would want to host one of his lawn signs ahead of the August primary.

Senate candidate Jason Lewis pointed out that our media have not been demanding to know the reaction of senior DFL politicians like Sen. Tina Smith to the rioting and looting and the calls for the disbanding of the Minneapolis police force. She and most of her DFL Congressional colleagues have been conspicuously quiet. He underscored how important this election is and how motivated we should be to work to ensure the election of candidates that share our views.

In the final half hour, House District 49B candidate Joe Thalman and House District 50B candidate Gary Heyer introduced themselves. They agreed that this is not a time to be quiet or passive in support of liberty and personal freedoms. Both promised to campaign vigorously and to do whatever they can to engage voters in our local area.

This Pints & Pent-up went for almost two hours, but the time went by quickly. We don’t yet know if Gov Walz will relax the lockdown of bars and restaurants to the point that we will be able to meet in our usual networking mode in July. If we cannot find a venue to host our event, we will be back again with another Pints & Pent-up on July 13. We’ll let you know in our next newsletter!