It's Not (Just) Our Message, More How We Deliver It 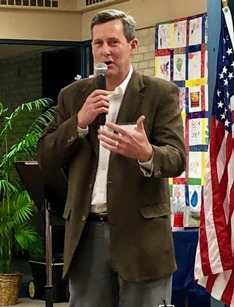 The January 22nd Dinner Meeting first started with a thank you from Edina’s own “native son” Keith Downey, pictured at right, who represented District 41A in the Minnesota House and who became the Chair of the Republican Party of Minnesota. Keith admitted that politics could be a “dirty, dusty, feisty business” but exhorted the audience to remember that we must “fight our (political) adversaries hard” according to our principles, but we must also always “leave the field as friends.” He said that one of the greatest privileges of his life was to represent the people of both his district and the State of Minnesota. It was an altogether heartfelt and inspirational talk as he exits politics to enter another phase of his life in the private sector. 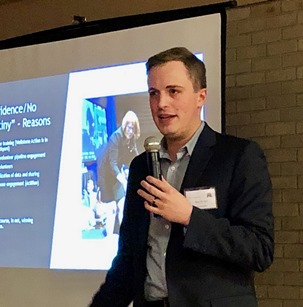 The main speaker of the night was Max Rymer, at left, a fixture in local politics and self-admitted “passionate, political nerd.” As founder of his digital marketing firm “Nativ3” he was actively involved in several campaigns during the last election cycle. Max had some insightful opinions about taking a drastically modified approach to Republican politics going forward into 2020 and beyond. He believes there are inherent, solvable, structural problems for Republicans in MN.

First, he gave us a frank, and sometimes brutal, assessment of what is and isn’t working for the Republican Party, and for the DFL. He compared and contrasted several differences in how we get our message OUT (contacts – e.g., DFL had more than 17,000 trained, articulate volunteers door-knocking) and ACROSS (effectively persuading folks to vote for Republican candidates). Finances (DFL out-spent us 4:1) and fund-raising differences (DFL has a centralized, shared, list of small-dollar donors) were particularly interesting and played a big part in recent DFL success.

In addition to the need for better and deeper training of the active Republican political base, Max observed that some of the DFL structure and organizational traits can in fact be emulated. Max encouraged us all to invest in becoming more “data-focused”, with consistent shared electronic lists of voter information and effective electronic tools to support door-knocking and phone messaging as well as calling. It just isn’t our parents’ “land-line phone, literature dropping, and lawn sign” universe anymore.

Finally, Max called for more “off-cycle” digital messaging efforts, keeping pressure on all the time so as to ride a positive momentum going into the next election