Jeff Johnson: Resistance is not Futile, but it's Tough Right Now

-Jeff Johnson provided his unique insight on the Hennepin County government and the Metropolitan Council to a large audience at the Senate District 49 dinner program on March 28.  It was clear from his remarks that both bodies are dominated by members who are not hesitant to address local issues by expanding government-funded services.  Johnson, Hennepin County commissioner from the 7th District, finds himself often the lone voice pointing out the misguided initiatives that waste taxpayer dollars.

Commissioner Johnson also spoke about the on-going contention over additional light rail extensions, including the Southwest Light Rail project.  To hear his remarks, please check out the SD49GOP video recording

He encouraged us to contact Rep. Erik Paulsen to express our support for proposed federal funding cuts for new light rail projects (the New Starts fund), for both SWLRT and the Bottineau Line project. At a cost of $124 million per rail mile (compared with $1-2 million per road mile), and a benefit of perhaps a 2% reduction in congestion, these projects just don’t make sense.

On the Metropolitan Council, Johnson pointed out that the 17 members are appointed by the Governor and accountable only to the Governor.  The current board is, in Johnson’s words, “completely out of control.”  For one reason, they have grown too large.  They have a billion dollar operating budget and an eight billion dollar capital budget.  They have over 4,200 employees for what is supposed to be a regional council.  And they are out of step with every other regional authority like them in the country.

The Met Council is totally unaccountable to the voters.  It has the authority to levy taxes, which has grown to $80 million in property taxes.  They can take property through Eminent Domain.  This lack of direct accountability alone, in Johnson’s opinion, is sufficient reason to eliminate this organization. 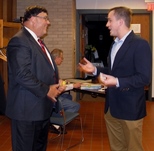 Finally, the mission of the Met Council is out of control.  They were created in the late 1960’s to essentially administer a metro-wide bus system and sewer system.  Johnson feels that this important function is secondary to their current 2-part focus.  The first is “densification”, forcing suburban housing to be more dense than those living in suburbs want to it to be.  The second is “racial equity”, including initiatives to attract more diverse attendance at area parks.  Neither function is at all related to the reason the Met Council was set up.

The legislature is moving forward on efforts to reform the Met Council, but major changes are not likely to be signed into law by Gov. Dayton.  Johnson hopes at least some “baby steps” toward reform might be possible.  Ultimately, Johnson believes that the best action is to eliminate the Met Council and start over with a new regional authority.

Turning his attention to Hennepin County, Jeff Johnson noted that he is one of seven commissioners.  The county government has some 9,000 employees, which has been growing “by leaps and bounds” over the last 3-4 years.  About 60-70% are union employees.

Johnson senses that there is an openness among his commission colleagues to change the way the county pays its employees, starting with its non-union employees.  The idea is to look at merit-based pay.  Today, the top employees in a particular grade get essentially the same pay as the worst-performing employees in that grade.  There is some timid openness to forcing a “bell curve” in pay.  It would compel managers (give them an excuse) to award incentive pay based on merit and not spread the incentives around evenly.

An even bigger hope is that Hennepin County will start to measure the performance of its “thousands and thousands” of programs and vendors.  Johnson pointed out that Hennepin County currently claims to measure program performance, but a lot of the measurements are “preposterous”.  He gave one example:  we often measure how many people we serve in a welfare program.  That doesn’t really measure results.  In some cases, it just measures whether or not people getting support from a program like getting the support.

Jeff Johnson and some of the Hennepin County staff are working with two professors at the University of Minnesota to create an actual policy on evaluation.  He expects that they will soon be spending “serious money” forcing long-term evaluations of these programs.  This will be hard, as it will be a real culture change for the County and its vendors.

He provided a few examples of what he considered unnecessary spending:

The county has a full-time bicycle coordinator (“bike tzar”) and a 25-year bike plan that calls for increasing bike-lane miles by 47% and spending $175 million in the next 25 years.

There’s a grant program to pay kids money if they say they will compost (no verification of action required).

The county paid to build a new grocery store in North Minneapolis, because surveys said fresh fruits and vegetables could not be purchased close-enough to homes there.

The county spent $10 million on Washington Ave. in downtown Minneapolis, a high-congestion road.  What was a congested 6-lane road is now an even more congested 4-lane road with a bike lane & sidewalks.  Demonstrating a common philosophy:  people in government know better than the citizens.  Or as Mark Twain put it “Nothing so needs reforming as other people's habits."

Jeff Johnson concluded that resistance is not futile and is worth the fight.  While big victories are very, very few and far between, he is seeing some positive, pro-active changes.  Almost all of them are behind the scenes with staff, and they are small steps.  He recognized that there are some staff that wants to make government work smarter and more efficiently.