In October 2015, five citizens brought a suit against the City of Bloomington.  The Bloomington city council wished to proceed to impose “Organized Trash Collection” by fiat. The city council had rejected an initiative put forth by these citizens that would have denied the City the right to impede “the competitive market in solid waste collection” unless first approved by a majority of the Bloomington voters.

On April 25, a Hennepin County judge issued a ruling against the citizens’ suit.  He observed that, “Nothing in the [Bloomington] city charter authorizes or requires the direct approval of a majority of the voters before the duly elected city council may act.”  However, the judge further noted that if Bloomington’s citizens “wish to redefine the powers of the city council, they are free to seek amendment of the city charter.”

They will.   Read more to learn why, and how you can help.

Benefits of City-Controlled System Not Measurable

The mayor, city council, city manager, and city attorney have consistently chosen not to bring Organized Trash Collection to a city wide vote. Rather, they have made the judgment that a city-controlled system of trash collection would be better for its citizens.  They have made this judgment despite the conclusions drawn in a memo issued by the City’s Public Works Director in July 2014:

Regarding cost savings, the City collected some local trash collection bills in a decidedly small and unscientific sampling.  The City concluded that city residents would save money through city-controlled trash collection.  It is difficult to understand how the suppression of competition through this government-managed cartel can be expected to save money or improve services over the long run.  If this were true, one would expect that the city would want to benefit its citizens through controlling other services such as lawn maintenance and pizza and package deliveries in a similar manner.

The small but determined citizens group that first brought the suit against the City has confirmed that it intends to pursue the path identified by the judge -- a charter amendment.  “We're just a group of citizens that want to make sure all citizens have the ability to have their voice heard.”  They vowed that they “are resolved and will do what is necessary to see this process through to its conclusion.” 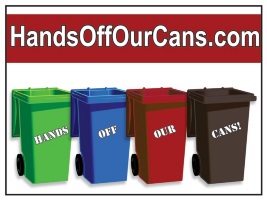 Known as “Hands Off Our Cans,” the group is going forward to collect a few more signatures.  They can use our help.  If you haven't signed any of their petitions or if you know someone else that hasn't, please let them know ASAP.  If in doubt, the group can confirm whether you have signed the appropriate petition.  You can visit their website by CLICKING HERE and/or contact them by email by CLICKING HERE.  Please do it soon, as an important window to petition Bloomington’s Charter Commission is open only for a short period this year.