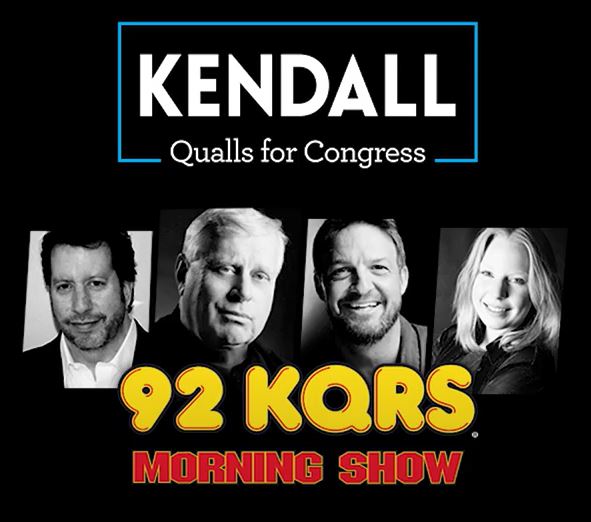 Tom Barnard interviewed Kendall Qualls, Republican candidate for Congress in the 3rd Congressional District, on the 92 KQRS Morning Show, October 5. Qualls reiterated the thread that has consistently run through his campaign, that the American Dream still works. It might take a little sweat equity on your part, but most Americans will reach out a hand to help.

Over the course of his personal life and professional career, Qualls has been helped by people of all backgrounds. Rich and poor, male and female, black and white, Kendall stressed that Americans help each other. The narrative that is coming from the left is not the narrative of our country.

Tom Barnard questioned how we have come to the point where people say, in effect, “You disagree with me; therefore, I hate you.” Kendall responded that we have had generations of people that have not necessarily known the true history of our country. Often what has been taught in high schools and colleges across our country is that America is bad, that we demolish peoples and cultures to get where we are. We are just now seeing the toxic effect that is having on the national dialogue. Kendall urged that no matter where we are on the political spectrum, we need to stand up and denounce this intolerance, to say that this is not who we are as a people.

Kendall told Tom that “Yes, we do have racist people in this country, but we are absolutely not a racist country “. People are responding positively to that message. People that have not been active politically are telling Kendall that his story is their story, that his America is their America.

Click below to listen to the full 11 minute interview.