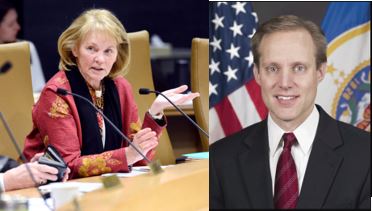 Minnesota Senator Mary Kiffmeyer (R, Big Lake) continues to voice the concerns of state voters who have had questions about Secretary of State Steve Simon’s administration of elections, especially regarding voter identification and provisional ballots. Simon appears to increasingly take these questions as personal attacks.

There is perhaps no one better to question how Simon has performed his duties to ensure election integrity in Minnesota. Kiffmeyer served as Secretary of State from 1999 to 2007. She is currently the chair of the Senate Government Finance and Policy and Elections Committee. Kiffmeyer has been particularly pointed in her questions about voter identification and provisional ballots, both of which Simon has opposed.

The relationship has been civil until recently. Sen. Kiffmeyer believes that it is important to raise all of the questions that constituents have, and that Secretary Simon has an obligation to answer them.

Rather than address questions about election procedures that might appear to offer opportunities for voter fraud, Simon has increasingly dismissed such questions as rehashing of past elections and unproven allegations of ballot harvesting.

How testy have the exchanges gotten? Peter Callaghan reported in a February 2 article in MinnPost that Simon wrote to Kiffmeyer that “some people (including elected officials) have chosen to wield conspiracy theories and misinformation in an attempt to undermine public confidence in our election system. … Those attempts are dangerous for our democracy. I hope you’ll join me in loudly and publicly identifying and debunking such corrosive fantasies.”

He also called the allegations of a tainted election “foolish and irresponsible.”

Before Kiffmeyer’s committee on December 8, Simon testified that anyone who trades in the allegations of voter fraud and stolen elections “is coating themselves in a shame that will never, ever wash off. Ever.”

Sen. Kiffmeyer held her ground under these emotional attacks. She said that Simon has met responded to her questions “with accusations and disrespect, which is very disappointing.”

“When I hear words in my committee accusing other people of lies, dangers and other things like that repetitively, it’s a great disservice and a great disrespect to the citizens of Minnesota who have an absolute right to ask questions,” she said. “To try to chill them or keep them from using that by these accusatory types of statements for the second time in this committee is not respectful and will not be accepted as the tone of this committee."

Simon has supported same-day voter registration without provisional ballots and equated voter identification requirements to voter suppression. He worked with the League of Women Voters to subvert legislation requiring a witness signature on mail-in ballots. He considers high turnout numbers as proof of the fairness and honesty of elections, but won’t open public voter registration records to audit by the Minnesota Voters Alliance.

Rather than support efforts to improve election security, Simon has become more strident in his opposition to the bills introduced this session, calling them a result of “a tidal wave of disinformation.” He says that Republican rationale for a voter ID bill “are lies designed to manipulate and mislead people.”

The Secretary of State should ensure a voting system that can stand up to challenges and close examination. Like a reputable security expert, he/she should be eager to eliminate any weaknesses that offer the opportunity of fraud or abuse. The fact that a lot of people voted just means that a lot of people wanted their voice to be heard. It is unfortunate when a large number of them aren’t sure that it was