April Conventions have elected new leaders for GOP CD3 and CD5, and a new Chair of the Minnesota Republican Party will be selected this weekend. 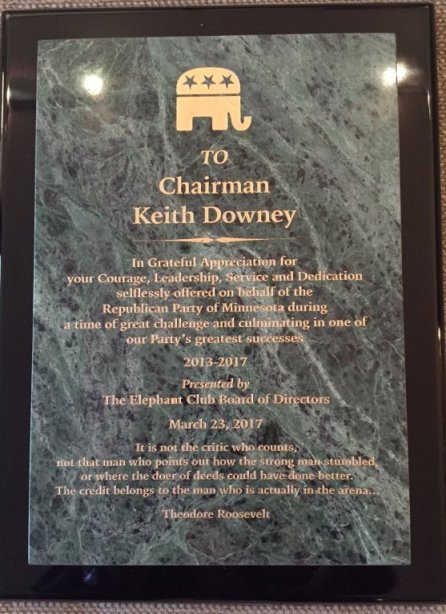 On March 23, Keith Downey presided over his last Lincoln Reagan Dinner as Chair of the Minnesota Republican Party.  The Elephant Club Board of Directors presented him with a plaque recognizing his contributions to the party.  The plaque read, in part:

“To Chairman Keith Downey, In Grateful Appreciation for your Courage, Leadership, Service and Dedication selflessly offered on behalf of the Republican Party of Minnesota during a time of great challenge and culminating in one of our Party’s greatest successes.  2013-2017”.

Senate District 49 is proud to count Keith Downey as one of its own.  Upon the end of his term on April 29, we will welcome him back and look forward to his continued contributions to our Republican Party.

David Pascoe, the past chairman is running to be the Deputy Chairman for the Minnesota Republican party.

Jesse Pfliger will be the new chairman of Congressional District 5.  He lives in Crystal with his wife Elise and 4 children.  Jesse ran for the Minnesota State Senate from SD61 in 2012.  He has been an officer in SD61 and his current home of SD45 in addition to various positions within CD5.

Mitch Rossow was re-elected as Secretary.

David Tribbals was elected as Treasurer after having served as Deputy Treasurer.

The new CD3 Officers are: