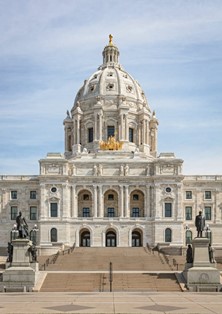 The Minnesota House wrapped up the 2021 regular session early the afternoon of May 17 without passing a budget bill.  The House adjourned shortly after a last-minute announcement that the Governor, Senate Majority Leader and the Speaker of the House came to an agreement on targets for the biennium budget.

House Speaker Melissa Hortman (DFL, Brooklyn Park), Senate Majority Leader Paul Gazelka (R, East Gull Lake), and Governor Walz set a global budget target of $52 billion.  While the target was set, it does not ensure approval of any of the omnibus bills.

Alpha News reported that the “appropriate” commissioners and committee chairs will work cooperatively together to reach an agreement within the target provided.  All working group members and commissioners must complete finance spreadsheets by 5 p.m. Friday, May 28.  Any policy and finance provisions included in a final omnibus bill must be agreed to by Walz, Gazelka, and Hortman.

The deal includes $440 million in state tax breaks for businesses that received federal Paycheck Protection Program loans and exemption of taxes for the first $10,200 of 2020 unemployment insurance.  These actions provide full conformity with federal tax provisions.

About $2.6 billion of federal stimulus money initially divided the parties. If the Legislature adjourned without agreement, Walz could have spent that amount.  The compromise holds that Walz will allocate $500 million, but the Legislature, working with the governor, controls the rest of the federal money, Gazelka said.

The agreement includes using the federally-provided COVID-19 flexible fund for:

Rep. Erik Mortensen (Shakopee), considers the policy differences to be “a vast divide between the House and Senate.”  Sen. Gazelka said the deal is a “win” since tax increases were ruled out.  However, “the work isn’t done. It’s just begun.”  The deal calls for a policy agreement by June 4 before a June 14 special session.  If there is no deal passed by June 30, the state government shuts down.

The June special session will be the next opportunity for the Legislature to force an end to the Governor’s emergency powers.  The DFL House will require 20 Republican voters to suspend the rules so that they can pass the budget bills.  House Republicans could use this vote as leverage to stop those emergency powers, but failure to suspend the rules will also likely extend the state shutdown.  Any negotiations on these matters will likely be done behind closed doors away from citizen review.

The New Republican Caucus pointed out last week that during the 2019-2020 biennium, only 150 bills were signed into law.  In comparison, during the 1973-1974 legislative biennium, 1,366 bills were signed into law.  The New Republicans argue that this is not because less legislation is getting through but because many of our elected leaders refuse to follow the single subject provision of our State’s Constitution.  That provision (Minnesota Constitution, Art. IV, Sec 17)  requires that all bills pertain to a single subject.  Lately, legislators are unconstitutionally lumping different subjects together in  massive omnibus bills that require only a single legislative vote.

As Rep. Cal Bahr (Ham Lake/East Bethel) has reported, the move to omnibus  bills is less an issue of efficiency than it is a consolidation of power.  Each legislator is less effective, less able to represent their district, and also less accountable regarding individual issues.