Hennepin County Commissioner Jeff Johnson will be the featured speaker for our Senate District 49 Dinner Program on March 28. 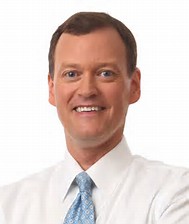 Jeff Johnson is one of seven commissioners on the Hennepin County Board and the lone voice of conservative principles on that body.   He has challenged the growth of the Hennepin County government and the tax increases required to sustain it.  Johnson has also questioned the cost-effectiveness of the Southwest Light Rail (SWLR) project.    He was the sole Hennepin County Commissioner to vote against contributing an additional $20.5 million to the SWLR project in August 2016 to help close a funding shortfall.

When the Hennepin County Board voted for a 4.49% increase in the county property tax for 2017, Jeff Johnson noted that it was very similar to the increase in the property tax levy that had been approved for 2016.  He said, "I don’t think we as a board push nearly hard enough for both bold change and, more importantly, actual elimination of spending.”

Johnson has produced a popular video challenging the cost benefit of the SWLR project.  At a little over 3 minutes in length, it is well worth watching.

He is an employment attorney and small business owner.  He was elected to the Minnesota House of Representatives in 2000, serving from 2001 until 2007 and attaining the position of assistant majority leader. Jeff has also served as the Republican National Committeeman from Minnesota and has been a candidate for state attorney general and governor.

Join us for a comprehensive look at our Hennepin County government and the push to build the Southwest Light Rail project! Please RSVP at the bottom of this page.  Let us know that you will be attending the dinner or just the program.