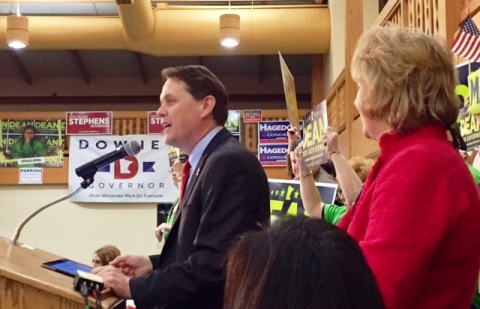 The highlight of the conference was to hear the Republican candidates for MN Governor talk about themselves and their platforms in a forum on Friday afternoon hosted by the MN Chamber of Commerce and in extended remarks on Saturday.  The delegates and seated alternates were then able to vote for their preferred candidate in a straw poll.

No candidate received a clear majority or came out with a significant lead.  Yet the results are important in identifying how party activists are leaning.

Mary Giuliani Stephens, mayor of Woodbury, declared her candidacy a few days before the State Central get-together.  Lance Johnson, also of Woodbury, was announced as a candidate at the MN Chamber of Commerce forum, but spoke only at State Central.

A larger cross-section of Republicans in Minnesota will be able to express their preference in a non-binding straw poll that will be conducted during the precinct caucuses on Tuesday evening, February 6.

Delegates to the State Convention elected at the Senate District convention on March 17 will make the final determination regarding party endorsement.

Virtually all candidates have promised to abide by that party endorsement.  Examples of the brochures handed out by the candidates at the State Central meeting will be available for review at our Holiday Party.