Minnesota Republicans held a meeting of the State Central committee to elect new officers in Saint Cloud on Saturday, April 29.  There was great anticipation leading up to the meeting with 4 candidates for Chair, 3 candidates for Deputy Chair and our own Barb Sutter running opposed for Secretary. 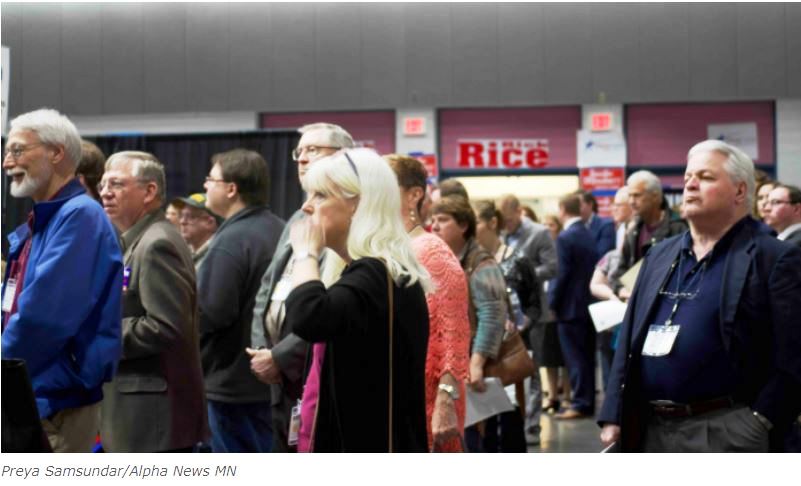 Almost 800 delegates and alternates showed up, of which 338 were designated to vote for the candidates.  Great credit goes to the four (4) delegates and 12 alternates from Senate District 49 for their commitment.  All but one of these representatives registered and came to the meeting ready to serve.  Attendance exceeded expectations, and for much of the meeting, it was standing-room only.

There were many key speakers that talked about the importance of the next election for governor and the need for all republicans to volunteer to support the party to be successful.  Tom Emmer and Jason Lewis came from Washington D.C. to tell of the changes being made as a result of the last election.  Kurt Daudt, Speaker of the House, and Paul Gazelka, the Senate Majority leader, gave us an update from the capitol, the challenges of working with Governor Dayton, and the importance of electing a Republican governor in 2018.  That set the stage for the voting.

Each candidate for MN GOP Chair had skills that would benefit our party.  Chris Fields had served as Party Secretary and was the serving Deputy Chair.  David Hann is the former Minnesota Senate Minority leader.  Jennifer Carnahan is a business woman who got in the race early and organized her support.  Rick Rice is the current Republican National Committeeman from Minnesota.  All of these candidates spoke to us at the SD49 Convention this year in February.

The three candidates for Deputy Chair were Andy Aplikowski, Jennifer DeJournette, and David Pascoe.  David Pascoe, who had been very effective as the Chair of Congressional District 5 won the election on the second ballot.

Preya Samsundar, reporting for Alpha News MN, wrote, “One delegate spoke out against the measure stating, ‘this would be the approval of Islamic/Sharia affiliate.’ A majority of delegates loudly opposed the delegate making the motion, and gave Faisal Deri, a Somali delegate, a standing ovation for his speech on being a Republican and an American.”