Over 2000 Minnesotans attended the Republican endorsing convention in Duluth that took place Friday afternoon & evening (June 1) and much of Saturday (June 2). The convention ran almost 15 hours of speeches, deliberations, and vote-counting, split roughly evenly between Friday evening and Saturday. 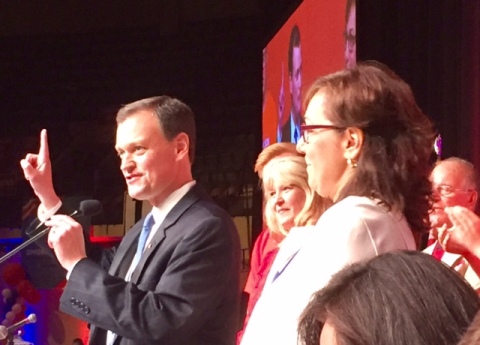 The most anticipated event was the Saturday afternoon endorsement for MN Governor. Jeff Johnson, former MN Representative and current Hennepin County Commissioner, went three ballots against Woodbury mayor Mary Giuliani Stephens and Navy intelligence officer Phillip Parrish. Jeff Johnson won every Congressional District on both the 1st and 2nd ballots. By the third ballot, Johnson was 170 votes shy of the 60% threshold needed for endorsement. At that point, both Stephens and Parrish conceded, and Johnson won the endorsement to a standing ovation. His running mate for Lieutenant Governor, Donna Bergstrom from Duluth, is pictured above beside him at the convention.

Former governor Tim Pawlenty did not appear at the convention and did not contest the endorsement, but has stated his intention to go up against Johnson in the GOP primary August 14. Early voting for that primary opens June 29.

During the Convention, attendees heard updates from the Democrat convention in progress the same weekend in Rochester. The outcome of the DFL vote for Governor was a surprising upset. U.S. Congressman Tim Walz and MN State Auditor Rebecca Otto were defeated by former DFL House Majority Leader and current House Rep Erin Murphy. Tim Walz has stated that he will contest Murphy in the August primary. Rebecca Otto is said to be considering her options.

The additional five Republican candidates to receive party endorsements were:

• State Rep. Jim Newberger won endorsement over Robert Barnheiser after one round of voting. He will contest the U.S. Senate seat currently held by Amy Klobuchar.
• State Sen. Karin Housley won endorsement to run for the U.S. Senate seat formerly held by Al Franken and now held by Tina Smith. Housley’s endorsement came on the first ballot, besting both Bob Anderson and Forrest Hyatt. Despite little activist support, Bob Anderson may continue his challenge to Housley at the August 14 primary. On the DFL side, Richard Painter and Smith will also face off in the primary in August
• Pam Myhra, former MN House representative and a Certified Public Accountant, had no opponent in her bid to be the Republican candidate for State Auditor. The DFL convention endorsed Julie Blaha, secretary-treasurer of the Minnesota AFL–CIO.
• Former MN Sen. John Howe won endorsement for his candidacy for Secretary of State, and will be squaring off against DFL Steve Simon, the incumbent.
• Doug Wardlow, most recently the legal counsel for Alliance Defending Freedom, had no opponent and won a standing vote for Republican endorsement for Attorney General. Meanwhile, down in Rochester, the expected DFL candidate, incumbent Lori Swanson, did not get her party’s endorsement. Swanson has been in office for 12 years, yet the DFL activists endorsed Matt Pelikan, an attorney with less than two years’ experience. In a surprise set of twists post-convention, Lori Swanson has now filed for the DFL Governor primary and Representative Keith Ellison (CD 5) has now filed, along with several others, for the DFL Attorney General primary. 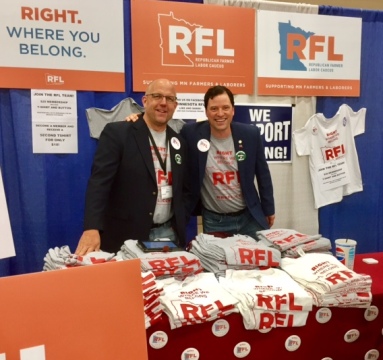 Of particular note, this convention also approved two new Republican affiliate groups. In a sign of the expanding appeal of today’s Republican Party in Minnesota, the Republican Farmer-Labor (RFL) affiliate and the Republican Labor Alliance were both introduced to the strong approval of the attendees.

Delegates also voted on changes to the State Party Constitution and Platform. This is the first full cycle for the new Platform format, which features the core principles that are permanent and supporting sections that “sunset” unless renewed at the next Convention.