A year ago, eco-terrorists vandalized several pieces of heavy equipment owned by Scheff Logging & Trucking, Inc. and harassed its employees on a worksite near Cloquett, MN. Now, the company has filed a lawsuit against those individuals, citing over $100,000 in damages The lawsuit names Defendant Shawn Etsitty and his co-conspirators, as well as the organizations that trained them and funded their activities.

The incident is the latest in a string of violent criminal protests by extremists who believe they are justified in breaking the law as a form of environmental-political activism.

The criminals tore out wiring, stole keys, cut hydraulic lines causing oil to drain into the ground, poured sand, glue and water into Scheff’s equipment, cut and pulled out wiring and damaged dashboards, drive trains and oil reservoirs, causing more than $100,000 of malicious and intentional damage to the equipment of this small family logging company working under contract for St. Louis County.

“This is not an isolated incident, unfortunately,” added Scott Dane, Executive Director of Associated Contract Loggers & Truckers of Minnesota. “Many small businesses in Minnesota have experienced similar disruptions and vandalism, and it needs to stop. The victims here are our families, our friends, and our neighbors – their livelihoods are on the line.”

The same gang vandalized the equipment of Casper Construction in Carlton County on February 6, 2019. The police followed their footprints in the snow and found Scheff equipment keys in their pockets. Defendant Etsitty recently plead guilty in criminal proceedings for the Casper incident, and is facing additional criminal charges for his involvement in the Scheff crimes.

“To prevent this kind of eco-terrorism from occurring again, we plan to pursue both the vandals and the organizations training and funding their criminal activities,” said Doug Seaton, President of the Upper Midwest Law Center (UMLC). “We intend to find out if the funding was provided with knowledge of what was planned, or willful ignorance of the plans. We will pursue legal remedies if there was culpable involvement by any activist organizations or foundations, and those foundations should be on notice that they are funding organizations with ties to criminal vandals.”

The lawsuit seeks civil remedies, including damages and an injunction against similar conduct in the future, against Etsitty and those who acted with him, and against those who assisted or funded this conduct, in order to deter future criminal activity. 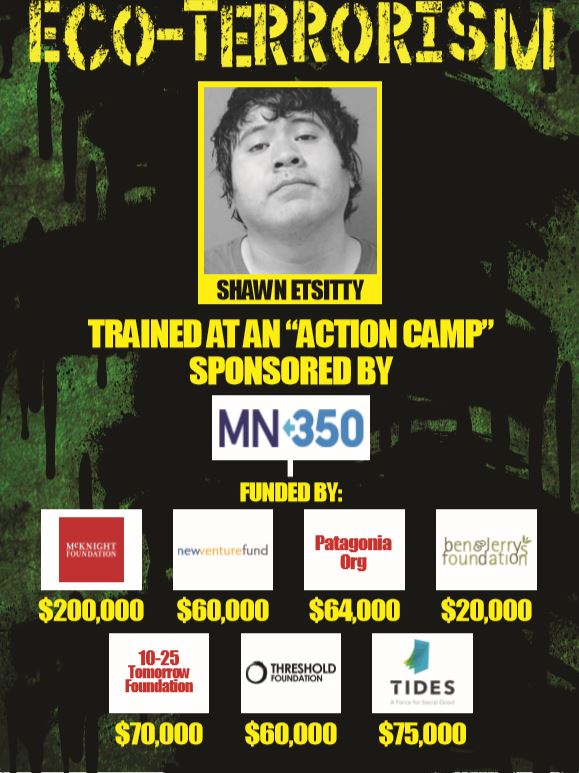