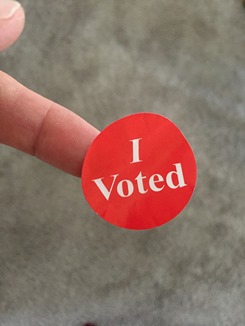 Voter turnout for the MN Presidential Primary March 3 was a respectable 26% overall statewide. More than 140,500 Republicans voted and about 5-times more Democrats showed up to vote.

In SD49A, Edina’s turnout was better than the statewide number, about 36% and there were 15 DFL voters for every 1 Republican who showed up. In SD49B, Bloomington/Eden Prairie, 1 in 3 registered voters participated (33%) and there were 9-times more DFL voters than Republicans.

In case you chose not to vote out of shyness for declaring your party-affiliation out loud at the polling place (for the Presidential Primary only), fears of that were unfounded in our area.  The use of technology for the verification of registration and ballot request helped preserve privacy. After a voter stated name/address to an election judge who located the individual's registration, the screen was rotated to allow the voter to press a button to indicate which party's ballot they wanted.  The ballot-request slip printed on identical plain paper was then given to the voter, who turned it in to a 2nd judge in exchange for their paper ballot from the appropriate party. There was no audible party-identification.

Unfortunately a staff member at the office of the Secretary of State mis-used technology.  For a portion of the morning of March 3, those looking online to find their voting locations were instead electronically re-directed to a Democrat PAC (Political Action Committee) website.  Once there, they were required to enter personal identifying information before proceeding.  In essence the Secretary of State facilitated disclosure of voter data to an organization other than the "major political parties" authorized by the MN Presidential Primary legislation.