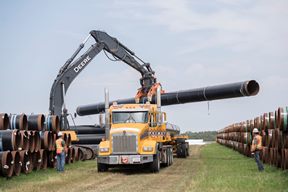 Last week, the Minnesota Court of Appeals dismissed an appeal by the Minnesota Department of Commerce, which could have halted progress with the Enbridge Line 3 Pipeline. On February 8, Members from the Minnesota House and Senate, on both side of the aisle, sent a letter to Governor Walz. The letter urged him to support the project to replace the Enbridge Line 3 Pipeline, a project that is the best interests of Minnesota. Governor Walz is scheduled to announce his decision Feb. 12.

The existing pipeline is corroding and in need of replacement. The new Line 3 will comprise the newest and most advanced pipeline technology—and provide much needed incremental capacity to support Canadian crude oil production growth, and U.S. and Canadian refinery demand. Last September, the Minnesota Public Utilities Commission (MPUC) voted unanimously in favor of issuing a certificate of need for the project.

Why isn’t it proceeding? Last December, the Minnesota Department of Commerce asked a state appeals court to reconsider the MPUC's decision. The appeal was filed in the final days of Gov. Mark Dayton's administration.

The project has gone through more than three-and-a-half years of review and evaluation by state and federal experts. It has been debated at 65 public meetings held by state agencies. The Administrative Law Judge held three weeks of evidentiary hearings. Tens of thousands submitted public comments.

According to reports, Walz is looking into whether his administration should continue the legal challenge. He now has until February 12 to decide whether to file a petition for reconsideration with the PUC, the first formal step toward a new appeal. If the Governor does nothing by February 12, the Department of Commerce's involvement in legal challenges to the Line 3 project would end.
If he elects to continue, he will be jeopardizing millions in revenue and thousands of jobs. He will be bending to the demands of environmental groups and ignoring the support of Minnesota union workers. We agree with the bipartisan signers from the Minnesota House and Senate: Gov Walz should let the project continue!