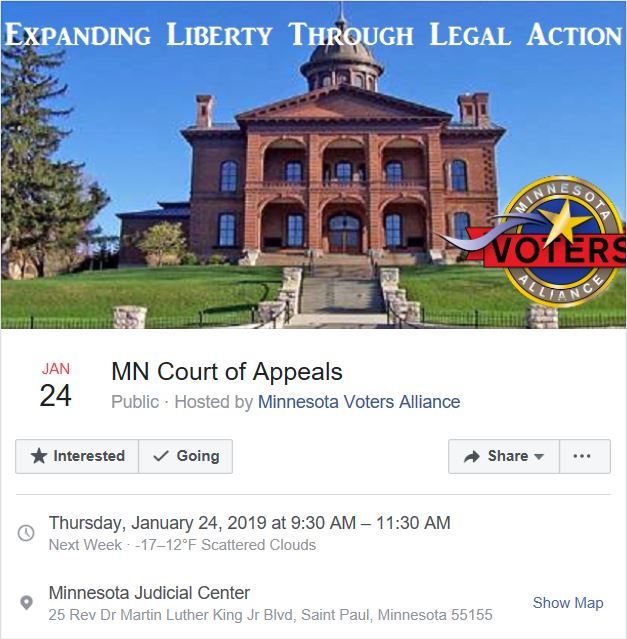 The Minnesota Voters Alliance (MVA) is asking everyone to consider attending one of the most important court hearings in decades involving the Secretary of State’s cover-up of the public voter data needed to evaluate our elections.

As you may recall, last fall, Ramsey County Court Judge Jennifer Frisch ruled in favor of the MVA and ordered Secretary of State Steve Simon to comply with the Minnesota Data Practices Act and provide the MVA with millions of voter registration records he has refused to make public.

This decision by the court is a huge victory over the unlawful, determined, and longstanding refusal of the Secretary to allow citizens a look into how the state's election system is being managed.

As part of the lawsuit, the MVA presented to the court a large body of specific data, from government sources including the Minnesota voting registration system, implicating the eligibility of tens of thousands of voters (which Secretary Simon ignores).

Not surprisingly, Secretary of State Steve Simon has filed an appeal to the Minnesota Court of Appeals.

Simon argues that he has the discretion to give out public and non-public data to whomever he wishes, which is absurd. Despite having no real arguments, Secretary Simon tells the media he promises to use 'all tools available' against us. Your MVA is prepared for the challenge.

Our goal in this litigation is to finally pry loose the data needed to understand:

How more than 26,000 persons marked challenged on the polling rosters, were permitted to vote in 2016, according to the recent report by the Office of the Legislative Auditor (OLA). The OLA examined only a small sub-set of those 26,000, namely 612, and determined only 19 of them to be eligible.

Why there were over 16,000 new registrants in 2016 ( and 15,000 in 2018) who identified themselves using the last four digits of a Social Security Number but could not be found in the Social Security Administration database. You can look up the statistics yourself at https://www.ssa.gov/open/havv/

How more than 6,000 registrants in Ramsey County alone failed the “address check” following the 2016 election.
And, how more than 2,800 individuals are recorded as having voted twice in the same election according to the limited data available from the Secretary’s office.

You’d think that the Secretary would feel duty-bound to examine these known indications that tens of thousands of potentially ineligible persons voted in the 2016 and 2018 general election. And, absent doing his own analyzing of the state election data, you’d think he would welcome outside efforts to do so.

Instead, the Secretary goes to tremendous legal lengths to obstruct the public’s attempts to analyze both the amount of ineligible voting and election officials’ performance in preventing it