Many people are attracted to the voodoo economics of the New Left. They are attracted because they feel the effects of the stagnation of real wages over the last several decades. They feel they do not have the same opportunities as previous generations due to educational debt, wage stagnation, and housing unaffordability. The New Left is playing on those widespread fears and proposing solutions that will be economic disaster. 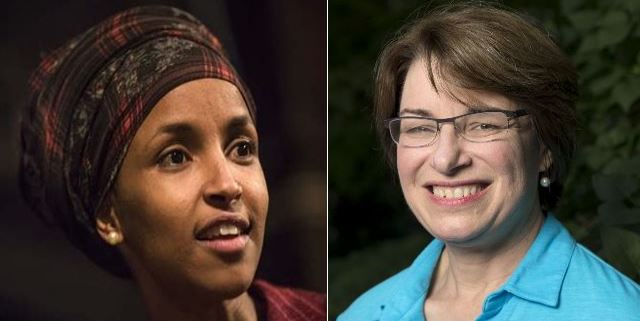 Representative Ilhan Omar (pictured, on the left) and over 30 other Democratic “Progressives” such as Rep. Ocasio-Cortez endorse the “Green New Deal.”
The Green New Deal includes:

1) 100 percent of U.S. power to come from renewable sources within 10 years
2) Rework of the U.S. energy grid to make it more efficient
3) Reduction or elimination of carbon emissions in the agriculture and manufacturing industries
4) Addressing climate change by eliminating pollution from air travel
5) Requiring all new and existing building to be more energy efficient
6) Health care for all
7) Universal basic income for all

Half of the Democratic Presidential candidates also endorse it. Sen Klobuchar (pictured above, right) has signed on as a co-sponsor , although in a CNN interview she said she considers it “aspirational”. Sen Smith didn’t respond to a request about her position on the Green New Deal.

What would it cost? One estimate is between $51 trillion and $93 trillion over 10-years .

How would the progressive Democrats pay for it? Rep Alexandria Ocasio-Cortez proposed a 70% income tax on incomes over $10 million. This rate would be the highest income tax rate of any developed economy. This additional tax would raise only an estimated $72 billion annually, or $720 billion over ten years, about 1% of the estimated cost of the Green New Deal.

Senator and declared Democratic Presidential Candidate Elizabeth Warren is proposing a 2-3% wealth tax on households with more than $50 million in assets. Note that the tax is imposed on the worth of those households, not just their income. While estimated to bring in $2.75 trillion over a decade, this tax still only raises at best 5% of the revenue that the Green New Deal would require. And there are both legal and practical problems associated with this concept.

It is likely unconstitutional.

These initiatives affect only the truly wealthy. However, the underlying economic theory the New Left is using to justify the Green New Deal will affect all of us.

Modern Monetary Theory (MMT) is the radical economic theory underpinning the New Left economic agenda. MMT frees the government from fiscal constraints. Under MMT theory there is no reason to make economic and budget trade-offs if you have underutilized resources in the economy. They theorize that the government can print money and put those resources to work without seriously increasing inflation.

The New Left looks to MMT to show that they can indeed provide medical care and economic security for all, a strong defense, free education, promised entitlement payments, and a new more energy-efficient infrastructure. That the proposed taxes would only cover a fraction of these costs is no problem. The government does not have to sell bonds to pay for its expenses. There is no reason to attempt a balanced budget. The government just prints more money.

They miss a crucial constraint in MMT. The government can only continue to stimulate the economy in this manner until full employment (or the limit of some other economic resource) is reached.

Our economy is working at essentially full employment. We are seeing significant shortages in key skills, such as health care, construction, and specialized manufacturing. Ever more money will be required to redirect resources to meet these needs. The more demand exceeds supply, the more prices go up. We have seen this before in the U.S. when we thought we could have both the war in Vietnam and the Great Society. We’re seeing it now in Venezuela.

Mainstream economists and most of the rest of us understand the economic concept of scarcity and the resulting need to make trade-offs. We cannot have it all. There is not enough “all” to go around. You cannot fund everything without growing inflation rates that hurt the poor and those on fixed incomes. MMT ignores this bit of common sense.

Republicans believe in fiscal responsibility and common sense. We need to get the message out to our friends and neighbors that believing in the Green New Deal is like believing in the free lunch.