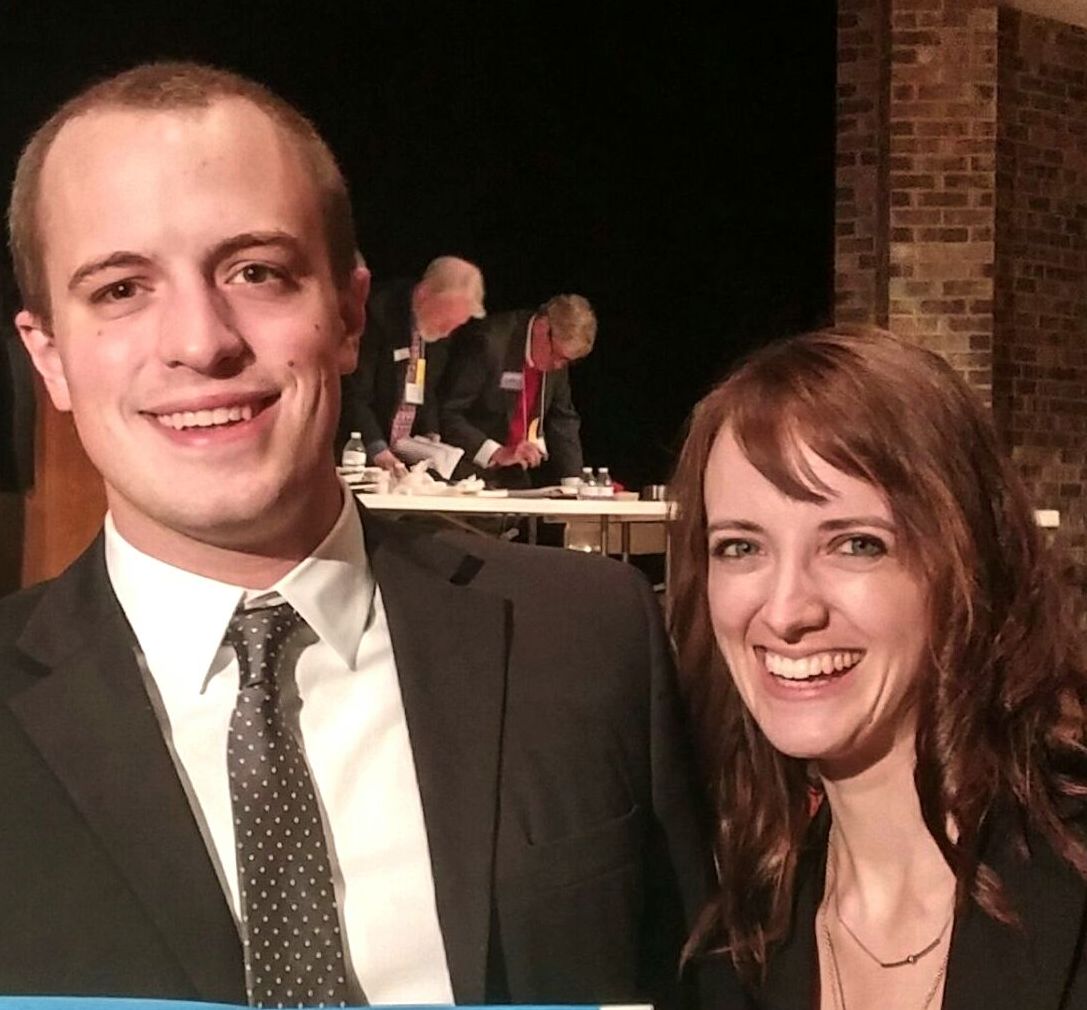 Max started by saying, “This is a dream come true for my wife and me. “  He and his wife, Elsie, both went to the University of Northwestern – Saint Paul. He was recently elected to serve as a precinct chair for Edina 13.  When he interned as a Legislative Aide for Pam Myhra, District 40A, at the Capital he saw the waste and dysfunction of government.  He believes government’s role is to create a more prosperous District 49 B and that businesses need relief from the tax bite. 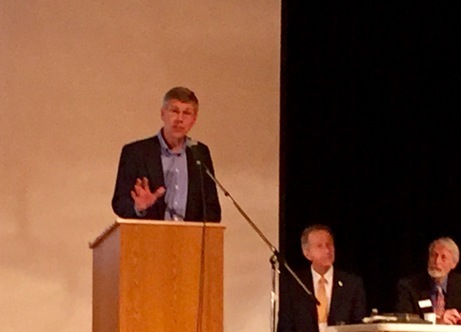 Over 210 participants also had the opportunity to hear from Congressman Erik Paulsen, Speaker of the MN House Kurt Daudt,

Strong volunteer efforts are the hallmark of our Senate District, and the stand-out volunteers were recognized during the convention.

The Executive Committee unanimously picked Barbara Sutter for its Crystal Eagle award, in appreciation for her dedication and service as a former treasurer of the district, former co-chair of the district, candidate for Minnesota house, and the force behind several successful fund-raising events.

Awards for 2015 Outstanding Volunteers went to

Sixty 60 volunteers worked together to make the convention a success.

On the 6th of April, our own Chris Rofidal, a member of Edina’s Ham & Eggs Club, introduced his guest — and featured speaker of the morning — the next Representative of House District 49 A, Dario Anselmo. 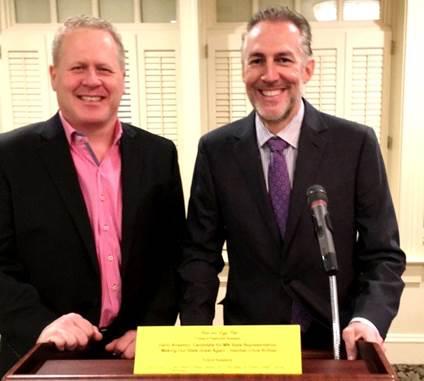 The following is taken (and edited) from the Ham & Eggs Club Newsletter:

In his presentation, Dario described how his parents provided leadership by example, through helping people. He indicated that leadership while listening to people is critical.

He’s proud of his recent involvement with the film society in Minnesota, suggesting that we’re not just a Vikings culture here…

With his typical, fast-paced delivery, Dario described his enthusiasm for what he calls the 3 E’s: Economy, Education and Environment.

His goal: making Minnesota a state businesses would want to move to. As a long-time business owner himself, if elected, he would love to serve on the Tax Committee. He believes we need to learn to spend wisely in order to get the best return for our dollars.

Dario believes our public schools are good, but unfortunately, not great. Upon leaving the breakfast, he said he would be phoning the principal of his 12-year-old daughter’s school regarding the ‘long-term substitute teacher’s class agenda’. Dario stated again, our schools are not working as well as they could…

So how do you change things such as the so-called achievement gap?  He believes it’s not just about spending money... If Edina can’t get it right, how do we expect other parts of state to be able to, he asked.

Our own Doug Seaton — along with a few other activists within our Senate District — is hoping to become a Minnesota Delegate to the Republican National Convention in July.   Doug was recently featured in a MinnPost article, linked below.

There is an application process that’s required to be completed, and the deadlines for that are fast-approaching.  For more information, go to the “News” section of our website, sd49gop.com, and read Becoming a Delegate to the RNC.

With that clarification in mind, in the following linked story from MinnPost,

Mandatory Paid Family Leave? Brought to your taxes by the DFL

The DFL is about to push increased employment taxes to cover mandatory paid family leave.

Senate Majority Leader Tom Bakk, DFL-Cook, said he wants to pass a paid leave law this session, so it's time to learn what that could mean for us.

Our own Doug Seaton expresses his reservations -- and why -- as you'll read in this article published by the StarTribune.

A great part of political involvement is the opportunity to join with other people with similar interests and viewpoints.  The MN GOP has been proud to be associated with a number of “Affiliate Groups.” These groups, as Janet Beihoffer (National Committeewoman from Minnesota) pointed out, “bring together like–minded people.” While affiliates have no specific membership requirements, because of their identity focus, the membership tends to be self-selecting.

Visiting a meeting or joining an affiliate group can be tremendously rewarding as you work on common goals, organize events, identify supporters and, ultimately, contribute to Republican victories on many levels.

If you would like to join or visit an affiliate group

Becoming a Delegate to the Republican National Convention

Becoming a Delegate or Alternate to the National Convention, July 18 -21 in Cleveland, Ohio, takes planning, time and your own funding of approximately $3000 of travel and convention costs.

National Delegates and Alternates are nominated and voted on at each Congressional District’s convention (3 elected per District) and an additional 11 are nominated and voted on at the State Convention.  Before the conventions, those interested must complete a formal application to be a National Delegate, thus there will be no nominations taken from the floor without a formal application having been submitted.

Here are the requirements as issued by the Minnesota GOP for potential Delegates:

“A potential candidate to serve as a delegate or alternate from Minnesota to the 2016 Republican National Convention must be selected by a vote of Republican delegates elected at either their respective congressional district convention or the state convention.

Voting is conducted by secret ballot, and the nomination process for becoming a candidate for national delegate is governed by the convention rules.

On January 15th of this year Governor Dayton announced his $1.4 billion bonding proposal in what was titled a “Jobs Bill.” Since that date, non-partisan state officials have indicated that we don’t have the debt capacity to accommodate that amount for a bonding bill, with targets set at about $850 million or less.

The Governor proposed the following list of projects, listed by county:

Additionally, here is the list of water projects in his proposal, by city:

Nonetheless, House Republicans remain disappointed that the Governor did not set aside funds for Greater Minnesota or suburban transportation projects.

The House Capital Investment Committee, led by Chair Paul Torkelson (Republican of St. James), is taking the necessary time to properly vet all bonding requests during this legislative session

Franchise Fees: a bad idea (even if everybody does it)

Bloomington residents, nonprofits and churches started seeing a city Franchise Fee on their Excel and CenterPoint Energy bills in March.  With these new “taxes in disguise”, they joined the 85% of the residents of Hennepin County who are already subject to franchise fees. This includes neighbors from the cities of Edina, Eden Prairie, Minnetonka and Richfield.

Peter J.  Nelson, Vice President and Senior Policy Fellow at Center of the American Experiment, testified March 3, 2016, to a division of the MN House.  He provided an understandable in-depth look at the legal pitfalls of using franchise fees in place of taxes.