Next Up: SD 49 Convention on Saturday, March 17 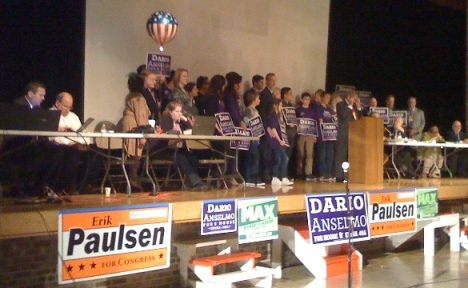 The caucuses have been conducted, and each precinct has elected delegates and alternates to the Senate District 49 Convention. The convention call will go out no later than February 17 to those who were eager (or at least willing) to become a delegate or alternate. As an advance look, this is what you can expect.

The SD 49 Convention will be held conveniently at Bethany Church, 6900 Auto Club Rd, Bloomington. This year, we are giving a later start time a try. Volunteers willing to help us set up registration and credentials will be asked to come at 8 am. Everyone else is asked to appear to register early enough so that you are in your seats to convene our convention at 10 am.

The main business of the convention will be to endorse our candidates to run in House Districts 49A and 49B. Dario Anselmo is the Republican incumbent in 49A and will seek our endorsement for another 2-year term.

If you want to be the Republican candidate for the Minnesota House for 49B (west Bloomington, south Edina, and some eastern precincts of Eden Prairie and Minnetonka), you are welcome to contact Mike Lehmann at mlehmann55@comcast.net or Randy Sutter at randy@sd49gop.com.

The convention will vote on delegates and alternates for the follow-on Congressional District and State conventions. We will also consider the resolutions to the MN GOP platform that were submitted during the caucuses. And we will have the opportunity to hear from candidates for the US Senate and the US House of Representatives, MN Governor, Attorney General, Auditor, and Secretary of State, as well as the Hennepin County Sheriff.

The Senate District convention is democracy in action. It is the grass roots work that goes into being knowledgeable about who wants to represent us going forward. Who are the leaders that we will support? Are the proposed changes to our platform reflective of our core values? Have we done the best that we can at our level to send forth candidates that we will enthusiastically support and help elect?

To those of you who have agreed to help with this work, thank you. We look forward to seeing you on Saturday, March 17.