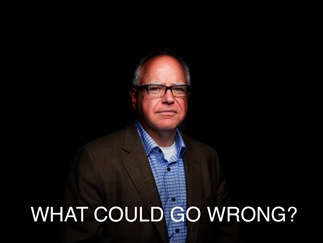 After nearly a decade of creating expensive technological failures (MNSure, MNLars, and E-Pulltabs to name three), the state of Minnesota announced Feb 18 it had created an online portal to manage the administration of the COVID-19 vaccine.

“When asked for comment, the entire population of Minnesota sighed in dismay,” a MN GOP press release observed only half-jokingly at the time.

What’s since come to light is the news that an outside firm with deep DFL ties developed and manages the site. Just who is involved was initially noted in a quiet early February Twitter post by MPR reporter Catherine Richart and subsequently highlighted March 10 by Alpha News.

The state currently has a confusing array of ways to seek vaccinations. Registration with the State is NOT required for a person to be eligible to receive the vaccine. However, the State is running two parallel registration processes: a “lottery” for vaccinations at a state-run COVID-19 Community Vaccination Program site (Minneapolis, Duluth, Rochester, or Eagan) and a “Vaccine Connector” which attempts to offer information about nearby options at approximately 712 clinics, pharmacies, hospitals and public health offices based on an individual’s age and location.  The “Vaccine Connector” also asks intrusive personal questions as noted in our earlier article.

Pharmacies and clinics are now independently reaching out to their own patients based on age and health conditions. These sites report numbers of vaccinations completed, and those are included in the MN Dept of Health’s vaccination statistics.

It’s unclear from those statistics how many “State lottery” vaccinations have been administered. MN totals from all providers as of March 13: 1,240,140 people have received at least 1 dose of vaccine and 724,692 have completed their vaccination series.

How to “fairly” distribute the vaccine within the state has been subject to pressure from “equity” (i.e., not age-based) advocacy groups, as reported by the Star Tribune.

MPR provided some in-depth insights in this February article about the lottery’s impact on clinic and hospital vaccine distribution availability.

The Governor’s action to bypass standard bidding procedures and to award a contract to a firm that hired a former DFL candidate, his campaign manager, and Walz’s former deputy chief of staff is another example of his abuse of emergency powers that have gone on for too long.