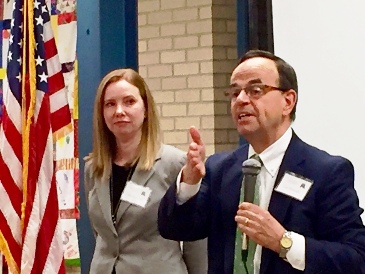 SD49 celebrated National School Choice Week on January 24 by hosting Lee McGrath and Chas Anderson, representing “Opportunity for All Children”.  OAK is the premier advocacy organization in Minnesota focused solely on building grassroots support and advocating for parental choice in education for all families.  OAK's mission is to ensure that every child in Minnesota has access to an education that will help the child thrive.

Lee McGrath pointed out that many private high schools, whether run by religious or secular organizations, have greatly improved the educational experience of minority students, as measured through state and local assessment tests and graduation rates of 99%.  Unfortunately, the ones needing this private school opportunity are the ones who can least afford it.

Over half of the states have enacted legislation to grant educational tax credits / opportunity scholarships,  or vouchers / Education Savings Accounts (ESA’s).  Milwaukee has used a voucher system for 20 years.  Low-income parents of children in Milwaukee schools can take the voucher to any public or private school.  Arizona has offered school choice since the 1990’s, and ESA’s since 2013  The operative idea is that parents will actively seek out the school that will best meet the needs of their children.  An ESA is especially helpful for parents of disabled children who may benefit from a mix of traditional classroom, home-schooling, and therapy-focused education.

Anderson and McGrath spoke about an initiative going through the Minnesota legislature now to use state tax credits to improve educational opportunities and to narrow Minnesota's education gap.   Called the “Opportunity Scholarship Program,” the legislation would grant tax credits to individuals and companies that give money to create scholarships at high performing K-12 schools.  The donated money would actually go to foundations, which in turn would offer scholarships at two or more schools.  Parents of students who might not otherwise be able to afford the school could apply for the scholarships. 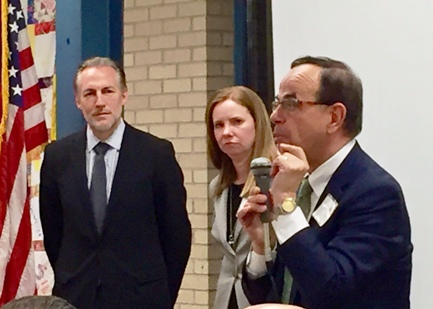 The legislation is currently working its way through the Minnesota House and Senate committees.  House File 386 has been reported out of one committee and is being considered by a second.  Senate File 256 has been reported out of committee in the Senate.   Both have bi-partisan support, although it is still early in the process.  The bills do not divert funding for public schools.  The tax credits simply reduce the revenue coming into the General Fund.  The impact of the reduced revenue can be addressed anywhere across the budget.

Rep. Dario Anselmo (R-Edina) joined the speakers toward the end of their presentation, mentioning that he appreciated the testimony given by McGrath and Anderson in the House committee hearings.  He has not endorsed the House bill yet, but he expects to support it in the near future.

Chas Anderson is the Executive Director of Minnesota OAK   Earlier in her career, she served as Deputy Commissioner of Education in Tim Pawlenty’s administration.  She has spoken to us before as a panelist for our Fall Conversation in 2015.

Lee McGrath is an attorney with the Institute for Justice.  He is a self-described Libertarian lobbyist fighting forproperty rights, economic liberty and less government.  Important to us in SD 49, he is the co-chair of Edina Precinct 03.

Editorial note :  The Ed Choice website CLICK HERE  is a helpful starting point to learn more about this issue and compare programs from other states.