Observations on the 2018 Elections 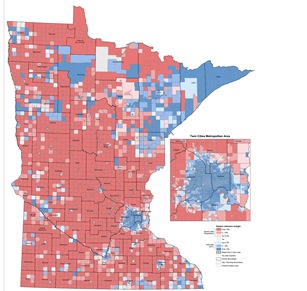 Jeff Johnson noted at the end of his campaign, "I'm proud of the race we ran. The 1.1 million votes we received were more than any governor candidate in Minnesota history - except Tim Walz. That number would have been enough to win in any other year, but the turnout for Democrats, particularly in the metro, was overwhelming."

The 2018 election in Minnesota ended with a DFL win for more than just the governor. With the exception of Attorney General-elect Keith Ellison, the DFL statewide candidates won by larger than expected margins. This was driven by a number of factors. A huge 64% of Minnesota voters went to the polls in a non-presidential election year. Early voting was up three times over the last election.

Perhaps most importantly, there was a large voter turnout in the core cities of Minneapolis and St. Paul, but also a strong showing in the Third Congressional District. Precincts in CD5 composed of UofM housing had 85-100% voter turn-out on election day. Many took advantage of same day registration. 80% voted DFL down the ticket. The Twin Cities campus population is 90,000 alone.

The importance of the metro area vote can be illustrated in the governor race. The DFL ticket of Walz/Flanagan won by almost 300,000 votes statewide. In CD5, they won by over 200,000 votes. They also won in CDs 1, 2, 3, and 4 and came very close to winning in CD8. Johnson/Bergstrom needed to run up the score in CD8 (they won it by just under 5,700 votes) and limit the damage in CD5. Neither of these happened. Further, a big margin for Walz/Flanagan in CD3 (almost 44,000 votes) all but neutralized the GOP-heavy CD6 returns.

Ultimately, the DFL delivered on what they said was a winning formula: drive up turnout in CDs 4 and 5 and limit the margins elsewhere. On a night where the DFL base was clearly more motivated than the GOP’s was, and suburban voters showed a preference for the DFL as well, there was no path for GOP statewide candidates forward.

Looking at the other statewide GOP candidates, their vote totals were all within 56,000 votes of each other except in the Jim Newberger-Amy Klobuchar contest. The results suggest strongly that the GOP was able to motivate its base state-wide to vote a straight party ticket. Unfortunately, the appeal did not extend to DFL or independent voters. Of special note is that the Grassroots – Legalize Cannabis Party candidate scored over 5% of the vote in the Attorney General’s race. These voters choose to vote for Noah Johnson rather than either of the major party candidates. And if the GLC Party received one vote in every county, it will be recognized as a major party in Minnesota moving forward, granting it ballot access and candidate subsidies.

Turning to the State House of Representatives, the GOP campaigned to sustain a 77-57 majority. Election Day ended with 18 seats changing parties and a 75-59 DFL majority. The DFL picked up nearly every swing district and, with the exception of two, they were all in the suburbs. Several were close races: Six decided by two points or fewer and three more were within five points. It is worthwhile to note, however, that the House GOP also won three races decided by two points or less.

Thanks to the Medical Alley Association for summarizing the election results.