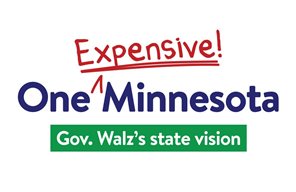 The state budget unveiled by Gov. Walz last week is better described as a blueprint for “One Expensive Minnesota.”

Steve Elkins, DFL representative in SD49 has written, “the Governor’s budget broadly focuses on driving down high health care costs, improving education overall, and ensuring community prosperity.” In fact, it raises the cost of gas, health care, and many of the other goods and services Minnesotans rely on.

In total, it raises taxes by more than $3 billion over the next two years at a time when Minnesota has a $1.5 billion budget surplus. 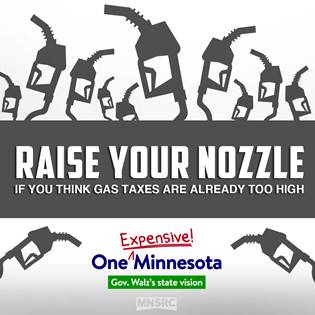 Gov. Walz is proposing a massive 70% increase in the gas tax. Rep. Elkins describes this hike as a “modest gasoline tax.” In fact, Minnesota’s gas tax would vault the state from #26 to #4 in the size of its gas tax. This regressive tax hits low and middle-income families hardest, and will increase the cost of food, clothing, other goods and services as well.

Billion Dollar Health Care Tax Hike: Gov. Walz is proposing to reinstate the "provider tax" (actually a "sick tax" since it's a fee added to each patient's bill) which would add more than a billion dollars to the cost of health care over the next two years. You don't lower health care costs by increasing health care taxes.

Raising Health Insurance Costs: Gov. Walz is scrapping the state reinsurance plan, which is a means for insurance companies to pool their risk, with a cap on risk backed by the state. He is eliminating reinsurance despite the fact that his own budget documents show that it successfully brought down rates on the individual market. For calendar year 2020, reinsurance would cost Minnesota $54 million per year (about half of Walz’s proposed alternative), and would help all 160,000 people in the market, not just half of them as Walz proposes.

The Governor would rather provide a 20 percent premium subsidy, but only for those who don't receive federal tax credits. Some projections estimate that rates would skyrocket by 50 percent if reinsurance goes away—even with a 20 percent subsidy. Minnesotans would be paying more under the Governor's plan. Gov. Walz's plan would cost $106 million and only help 80,000 people. The Governor is proposing to pay more for a plan that would help fewer people and ultimately result in higher premium costs.

Public Health Care Option Coming:  How does this make sense? Let’s turn to Rep. Elkins again. “The Governor is also working on a long-term solution that would deliver an additional, affordable and sustainable public health care option.” A public health care option – it would seem that if government subsidies don’t work, he is prepared to have the state take over more of the health insurance market.

“One Minnesota” is looking more and more like a place with higher taxes and greater restrictions and disincentives in our free market economy. Governor Walz's budget will make life more expensive for all Minnesota families.

With a $1.5 billion surplus, there's no reason we should be making everyday necessities like gas, groceries, and health care more expensive.

This is not the vision of Minnesota’s future that Republicans share.