The numbers show the need for systemic change. 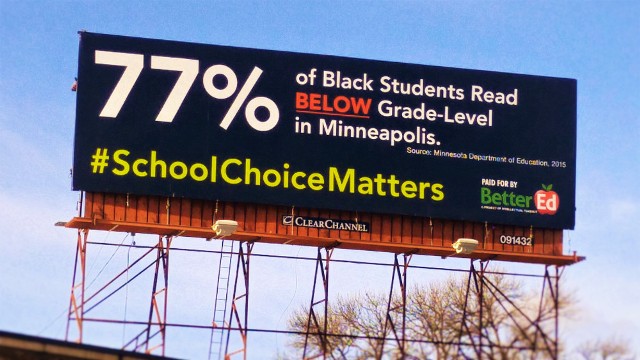 As you can see by the statistic shared on our billboard above, which is located directly across the street from the Minneapolis Public Schools' district headquarters, the plight of Black students in the district is absolutely unacceptable. Minneapolis has given all manner of excuses, promises, and "new" plans for years and years, yet little changes. And that's while spending an average of $21,000 or more per student each year.

The truth of the matter is that between the years 2001 and 2014, the average reading proficiency of black students was only 33%. Again, absolutely unacceptable.

Katherine Kersten was the featured speaker at our SD49 Dinner Meeting on October 27th, part of our monthly scheduled Dinner & Conversation Series. Kersten drew a full house to hear her description of the Metropolitan Council’s Thrive 2040 Plan.

Nancy Carlson, SD49 Executive Committee vice chair, introduced Katherine Kersten. The audience perched at the edge of their seats and remained fixed throughout the narrative.

Ms. Kersten outlined the four goals of the Met Council-high density, racial equity, inclusivity, and affordability. She stated that one of the intents of the Council was to “spread poverty equally throughout the 7-county Metro area in one grand homogenizing brushstroke.”

Clearly opposed to the Met Council’s Thrive 2040 Plan, Ms. Kersten reiterated the Council’s lack of elected representation.  She pointed out that the Citizen’s League, the organization that originally spearheaded the drive to form the Met Council, now is reevaluating its support for the council.

The Metropolitan Council is a 17 member regional super-government appointed by the governor and accountable to no one else.  The Council has full taxing authority and a new mandate to change housing, transportation and the environment; in short, how you and I live our lives every single day.  The prospect of an unelected board of apparatchiks micro-managing how we live is a chilling consequence of the radical expanse of governmental authority.

The Council was founded in the mid-1960s as part of a then-popular move toward “regional planning.”  In essence the Council was sold on its promise to make sure that intra-county resources like roads and utilities are developed in a cooperative and efficient manner.   As originally conceived, the Council’s charter to encourage efficiency by minimizing duplication among counties made a great deal of sense.  After all, it made no sense if Scott County installed a system of waste-water pipes that failed to connect with the waste-water treatment facility maintained by Hennepin County.  Over the past half century, however, the Council has gobbled up more and more power, gradually expanding its scope and size.  In the process, the Council has gained full taxing authority and has dramatically expanded to the point that, under Governor Dayton, these 17 unknown bureaucrats have virtual plenary power over every single person living within the seven county metropolitan area.

At the end of 2014, the Council adopted its most audacious power grab ever, adopting the innocuous sounding “Thrive MSP 2040.” This plan, reminiscent of the great centralized plans so popular in the former Soviet Union, will dramatically reshape how every person in the metro area lives and gets around.   Like other grand governmental programs, the Thrive plan is full of vague and lofty sounding goals.  In reality, however, the Thrive plan imposes a host of new ideologically-motivated criteria for municipal control; control that will be the exclusive domain of the central governmental authority unchecked by elected representatives and unaccountable to the taxpayers of the region.